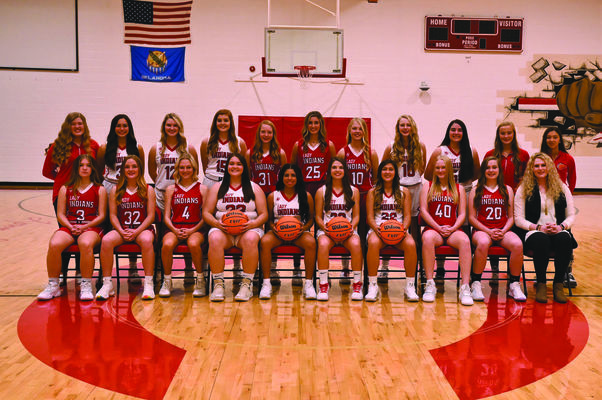 Megan Robbins has been working with her team for several weeks now as they prepare for their season opener against Empire on Dec. 4.

The new Comanche girls coach and her team are getting used to each other as Robbins takes over for longtime coach Aaron Weast.

“It’s been going good so far,” Robbins said. “I’ve got a good group of girls that have bought into everything new and they are willing to learn. They’ve had a taste of success here and they want to work hard to continue to be successful.”

She said the group is good at adapting to do what needs to be done.

“They can run the offense and execute it,” Robbins said. “We’ve got some good shooters and good defenders and they are learning the system.”

She said the work ethic and attitude is definitely a team strength right now.

“The biggest challenge is to be healthy and stay out of quarantine,” Robbins said. “All you have to do is sit next to the wrong kid.”

The reality of having to play for a new coach has not scared away any potential players. The Lady Indians are 18 strong.

“We only have 15 uniforms, so it brings out good competition as they want to have a uniform,” Robbins said.

They each bring a little something different to the team, according to Robbins.

“Teagan and Kinley are the shooters, Shayson does a good job in the post, and Jasmine is a good defender,” Robbins said. “They are still trying to find themselves a little bit. Brooklin Bain was such a dominant presence last year and now they are learning what they have to do.”

The four seniors plus Gracee Miller and Caity Blair all started or received a lot of playing time during the course of last year, which will be a good base to build from even though Robbins does not believe in having a starting five set in stone.

“I have an idea who would start if we were playing a game tomorrow,” Robbins said.”We have one more scrimmage to look at everybody.”

The Lady Indians may be a little undersized compared to most teams they play, but Robbins sees benefits as well.

“We’re fast and a lot of times speed can overcome size,” Robbins said. “We’ve got some good shooters and we’re going to be aggressive and play to our strengths.”

“It’s been fun to instruct and teach, again,” Robbins said. “These players make it easy for me to want to come to work. This is a special