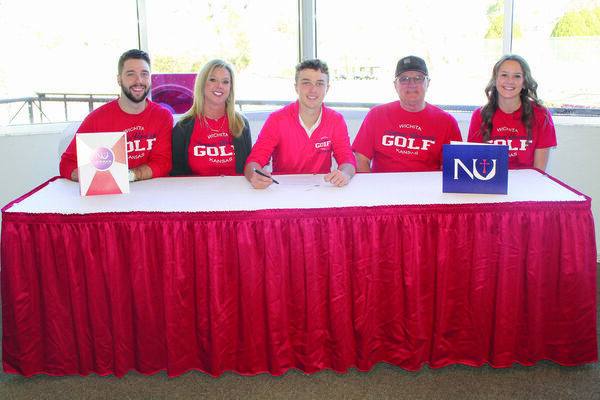 Bailor Harris did not get started in golf until he was in high school. It turned out to be a good fit though and he quickly picked up the game.

Now, the Comanche High School senior will get to continue his golf game at the next level after signing with Newman University, an NCAA Division II college in Wichita, Kan. at the Duncan Golf and Tennis Club, Monday afternoon.

“I started playing golf later than most, so I’m excited to get a chance to spend more time to enjoy my younger years playing in college,” Harris said.

Harris did not get a chance to play his junior year as high school spring sports were cancelled in the last school year, but he did get a chance to play in the Oklahoma Jr. PGA Tour, where he competed in 13 tournaments and finished the summer 19th overall out of 147 golfers.

Harris said he enjoys the people he meets competing as one of the reasons he likes the game.

“I also like the struggle and challenge every day,” Harris said. “You have to push yourself to accomplish your goals.”

He liked Newman because the college is modern and has up-to-date classrooms and facilities.

“The golf and training program is very good,” Harris said. “Plus, they have a variety of different courses in the area they play at and it will be a good test of my abilities. Josh Cook is the swing coach there and I think he is going to help me take my game to the next level.”