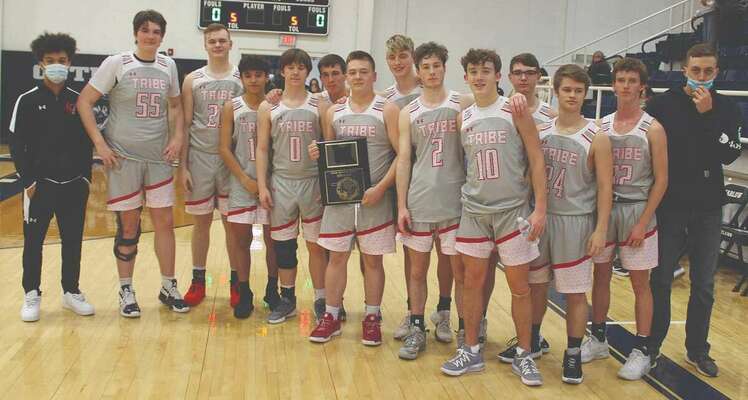 After entering the Stephens County Tournament with just one win on the season, the Comanche Indians picked up two at the tournament in Marlow and came away with the third-place trophy. After defeating Empire for the second time this season in the opener last Tuesday, the Indians fell to host Marlow on Thursday before bouncing back to beat Waurika on Saturday.

Mason Kulbeth was named to the all-tournament team on Saturday.

The Lady Indians’ hopes of a record-breaking seventh straight tournament championship ended in the semifinals against Velma-Alma on Thursday. Comanche then suffered its second loss of the tournament on Saturday, falling to Empire, a team they beat earlier in the season.

Marlow defeated Velma-Alma in both the boys and girls championship games to win the tournament titles.

Comanche led throughout the entire first half and most of the way through the third before Velma-Alma caught and passed them with less than three minutes to go in the third. Comanche was never able to respond and Velma-Alma punched its ticket to the championship final.

The Lady Indians led by as many as 11 points in the first quarter before taking a 14-5 advantage into the second quarter.

The Lady Comets were able to get within five points twice in the second but the Lady Indians responded and would go on to take a 21-14 lead into the half.

The three-pointer by Destinee Wofford was part of an 11-0 run that continued into the fourth quarter.

Comanche continued to struggle offensively as the Lady Indians did not get a field goal until Shayson Hodges’ three-point play with 3:16 left in the game that cut the lead to 45-35. It would turn out to be Comanche’s only field goal in the fourth quarter with the other seven points coming from the free-throw line.

Marlow scored the first seven points of the game and Comanche was not able to get closer than four points the rest of the game.

The Outlaws led 11-4 after the first quarter with all four points coming from Mason Kulbeth.

Marlow extended its lead in the second quarter, outscoring Comanche 18-7 to take a 29-11 halftime lead.

The Indians were able to get their offense going a little better in the second half, outscoring the Outlaws 15-10 to cut the lead to 39-26 going into the final quarter.

It was a back-and-forth battle all game long before Empire outscored Comanche 7-2 in the last four minutes of the game to take home third place.

There were seven ties and 15 lead changes throughout the course of the game.

Empire caught Comanche just over a minute into the second quarter and it would be a see-saw battle the rest of the way. Neither team would lead by more than four points the remainder of the game.

The teams went into halftime at a 15-all tie.

Empire outscored Comanche 15-12 in the third quarter to take a 30-27 advantage into the fourth quarter.

There were six lead changes and one tie in the fourth quarter. Comanche’s Gracee Miller put the Lady Indians up 37-36 with 2:27 to go, but Empire’s Jade Millan knocked down a three-pointer with 2:03 to go to give the Lady Bulldogs the lead for the final time of the game.

Comanche jumped out to a 13-0 lead in the first quarter and then held on the rest of the way to win the third-place game.

Waurika had a 9-0 run in the second quarter to cut Comanche’s lead to 16-12, but the Indians responded with Hadlee Rice knocking down a three-pointer to end the run as Comanche went on to take a 21-12 halftime lead.

The Eagles got the game down to one possession twice in the second half but were never able to catch the Indians.

Comanche led 24-20 at the end of the third and after Waurika cut the lead to 24-22 early in the fourth before the Indians responded with a 9-0 run, started by a three-pointer by Adin Cain, that pushed the lead back into double digits. After Waurika got the lead back down to six, Comanche closed out the game on an 11-0 run to seal the win.