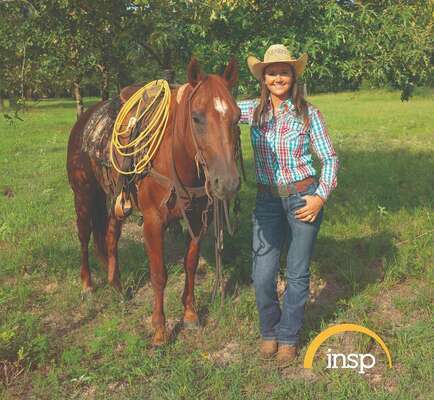 (This is the second of a two-part series on Comanche’s Katey Jo Gordon who is one of 14 people competing on the INSP network’s “Ultimate Cowboy Showdown.” The first episode airs on Feb. 24 at 8 p.m.)

The spotlight Katey Jo Gordon of Comanche is used to is within the confines of a rodeo arena. That will be changing shortly when she will be on INSP’s reality TV show, “Ultimate Cowboy Showdown,” which debuts next Wednesday on the network.

She was gone 22 days during the filming. She has been ranching and competing her whole life, she felt more comfortable with the challenges than the television crew in the beginning.

“It was the first time I had ever been in front of a camera that much,” Gordon said. “You did a lot of repeat interviews making sure they got what you said and things like that.”

It was a lot different than talking to someone on the phone or face-to-face.

“When there are a lot of people around, focused on me and listening, I’m like ‘holy moly, I don’t want all this attention,” Gordon said. “That was difficult for me. It took a while for me to get used to it and be myself in front of the camera and not be nervous and awkward as I can be.”

She said it took about five days to finally begin to feel comfortable in front of the camera.

“I didn’t realize they were there anymore,” Gordon said.

After challenges teams are assembled at the elimination ring where someone from the losing team is sent home.

Meeting the country music star, who was also their judge, was quite the experience as well.

“He’s a really cool and nice guy,” Gordon said. “He laughs and cuts up all the time. He’s super down to earth. You always think about celebrities like him being intimidating and he can be intimidating, especially when you are in the elimination ring. Other than that, he’s very nice to get along with.”

And she enjoyed hearing his stories.

“He’s had such an interesting life,” Gordon said. “He’s been through a whole bunch of stuff and for him to come from a humble background like that and to have gone through all the things he’s been through and to become such a big success story is really cool.”

Now, having learned how to be in front of a camera, she is now bracing to possibly being recognized by strangers.

“This actually happened to me the other day,” Gordon said. I walked into a store in Waurika and a lady there was like, ‘Hey, you are the girl that is going to be on TV.’ And, I said, ‘Oh, boy, yes, ma’am.’”

Gordon did not know what really else to say.

“She said that her and her husband watched season one and loved the show and she was so glad she was going to know someone on the show,” Gordon said. “I said, ‘Neat, I hope y’all enjoy it.’ I didn’t know what else to say.”

It is one of the reasons she made a secondary Facebook page to put on show updates and everyday life on the ranch.

“If someone sees the show and wants to follow what we do on a daily basis, they are able to,” Gordon said.

And as much as she liked the experience of the reality show, she was happy to get back home to a normal life with her husband Dylan and their ranch outside of Comanche.

“It was honestly the nicest thing ever to come back home,” Gordon said. “Literally, the day after I got home I went and weaned some calves with my dad (Jay Anthony). It was nice and comforting. There was just like me and three other people. There weren’t 50 other people and no one telling you to go sit over there and not to talk to anybody until it is your turn.”

It was nice to be able to relax.

“You can do your job without being in a hurry and it gave my poor horse (Pedro) a break,” Gordon said. “He needed a break so bad. It was nice to get on a colt and ride around and get back to normal.”

According to information provided by INSP, “the last cowboy standing will walk away with a prize package that includes a herd they can take to market, a Rawhide Portable Corral, an Arrowquip Q-Catch 87 Series Cattle Chute, the coveted ‘Ultimate Cowboy Showdown,’ belt-buckle, and a lifetime of bragging rights.”

The season two premiere of “Ultimate Cowboy Showdown,” will air Wednesday, Feb. 24 at 8 p.m. on the INSP network. INSP is available in the Comanche area on Sparklight (82), Direct TV (364), Dish Network (259) and Pioneer Long Distance (110). It is also available on online streaming services Vidgo, SelectTV, FrndlyTV and Philo.