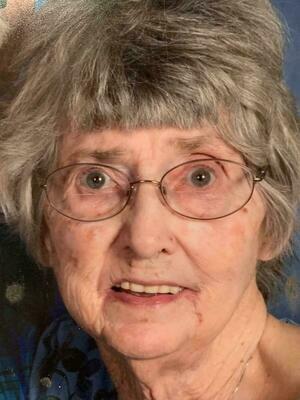 Carole Ann (Jones) Ritter was born September 25, 1935, in Apache, Oklahoma to Leonard and Corinne (Martin) Jones. She completed her earthly journey on March 5, 2021, in Duncan.

A graveside service is scheduled for Tuesday, March 9, at 2:00 P.M. at the Fairview in Apache with Pastor Gayle Repp officiating. Arrangements have been entrusted to Crews Funeral Home.

Carole graduated with the Class of 1953 from Apache High School, followed by nursing classes at USAO in Chickasha. She was employed in several healthcare positions from hospitals to home health care. She loved to attend church and was a faithful church member. She was awarded perfect attendance at New Hope Baptist Church West in Duncan. Earlier she attended Calvary Church of God in Lawton. She enjoyed visiting the sick and homebound. Carole loved OU football and watching Lawrence Welk. Her favorite game show host was Bob Barker on The Price is Right. She loved drinking Dr. Pepper and eating 3 Musketeers bars. She also enjoyed playing the piano and organ over the years.
She was married to Cecil Leon Repp. He preceded her in death in 2002. She later married Roy Ritter in Comanche.

She was preceded in death by her parents; husband, Cecil Leon Repp; and sister, Sherry Kay Jones-Mindemann.

Memorial contributions can be made to help end Polio by donating online to endpolio.org/donate (sponsored by Rotary International and the Bill and Melinda Gates Foundation) or to the American Cancer Society at cancer.org/donate.