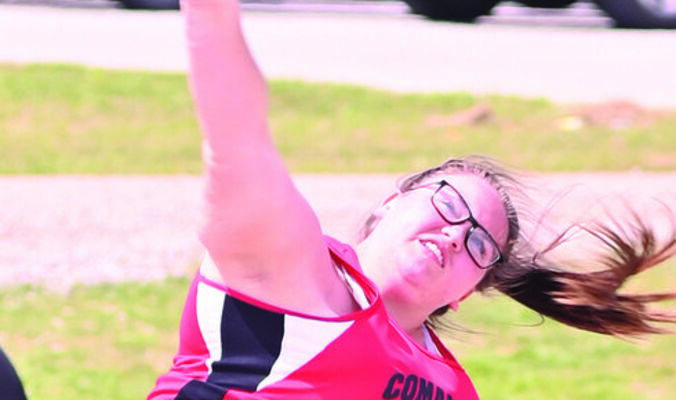 Shayson Hodges did her glide step from the back of the ring to the front and gave the shot put a mighty heave off her right shoulder at the Elgin track meet on April 2.

She was not impressed at first, but then she got some news that she had been waiting a long time to hear.

“The lines at that track were really confusing, so I actually thought I hit 35 feet,” Hodges said. “I thought, ‘Oh, that’s not a very good throw.’ And then when they called that 40, I got so excited I ran straight to my mom (Jennifer) and I gave her the world’s biggest hug and I started crying. I hadn’t even got to the finals yet, so I had three more throws after that one.”

Hitting 40 feet had been the Comanche senior’s goal since she started throwing in junior high. She won the event at Elgin by more than three feet competing against schools of different classifications.

Winning has been nothing unusual for Hodges this year. She has won all five track meets she has competed in going into the Velma-Alma meet on Tuesday with winning throws of more than 37 feet in four of them. She also has placed in the discus.

She will be competing in her third state meet, which would have been four if not for the cancellation of the state meet because of COVID-19 in her junior year.

Her goal this year at state is to place in the top six and according to the Oklahoma Track Coaches Association website, she has the top throw in Class 3A this season. She got 10th place in her freshman year and eighth place as a sophomore.

She is a multi-sport athlete, having played basketball and is heavily involved in other school organizations, but she finds time year-round to practice shot put.

“My dad (Jason) is really good at pushing me at things I’m talented at,” Hodges said. “So, all six years, he’s been really motivating me and keeping me ahead of the game.”

There is just as much technique as strength involved in throwing a shot put, which is why she practices more than just after school. She practices at least once a week at home as well even when it is not track season.

“If you throw a shot wrong, you’re going to hurt yourself, so you definitely have to put hours of dedication in year-round,” Hodges said.

The state meet is May 7 at Catoosa. It is more than likely going to be her last time throwing competitively.

“I’m not going to do this in college,” Hodges said. “I’ve thought about coming back and coaching. It’s not my first job choice, but it’s always been a thought.”