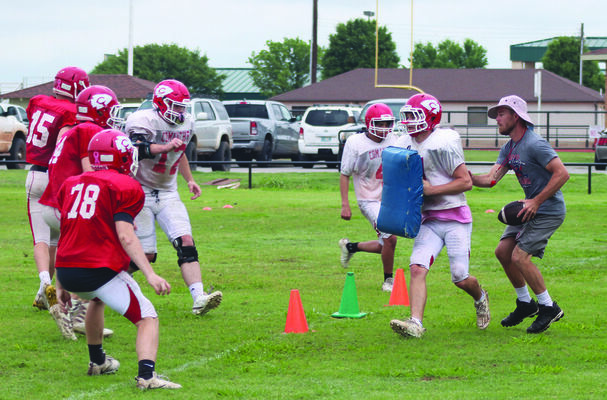 While some students may have been thinking about summertime activities, Comanche football players were busy on the practice field last week getting ready for next fall.

Head coach Casy Rowell was pleased with the effort he saw with the 2021 version of the Indians.

“It’s been going really well,” Rowell said. “We’ve been blessed with the weather,” Rowell said. “It rains and then it’s like the clouds part from 9 to 11 (during practice) and then go back. You couldn’t ask for much better weather.”

Rowell said the weather had been a concern as they feared coaches would not be able to work on all the things they wanted to work on.

“We’ve just been blessed,” Rowell said. “That, plus the kids seem to all be into it. They’re having fun and are motivated. I know it's hard when it's summer to focus, I understand that, but they’ve done a real good job of getting here and I feel like we’re getting something out of it as far as practice.”

The coach said numbers have been good.

“It’s up there where it has been the past few years,” Rowell said. “We’ve been getting in the 30 to 40 range. What I like is, in the past, we would start with 30 or 40, but wouldn’t finish with that many. I feel like with this group, we’re going to finish out with guys who stick with it and are committed.”

The first week consisted of breaking off into position groups and working on fundamentals for those positions.

“We’ve been able to break into some base plays on offense and some base plays on defense,” Rowell said. “We’re just trying to give them an idea because we are going to go to a team camp in a couple of weeks and we want to have some base stuff down.”

The purpose of the team camp, according to the coach, is to be able to evaluate players heading into fall practice.

“It’s the purpose of this practice, too,” Rowell said. “We want to see who has progressed throughout the year.”

For right now, the team has been working on schemes they already know and will build on that later on.

“We plan on adding some things and maybe changing some things, but right now, we just want to work on that base they already have down and get the same language going.”