Indians fight back to win opener against Dickson, 30-20 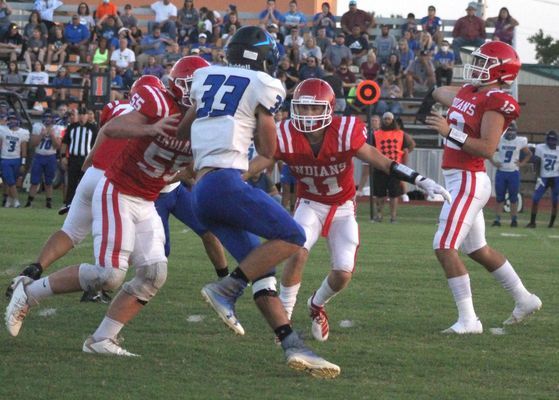 The Comanche Indians were down on the scoreboard, but their heads never were.

The Indians trailed 20-12 at halftime in their game against Dickson, but they would score 18 unanswered points in the second half to pull out a 30-20 win in the season opener.

"The first part of the game, I thought it was my fault with coaching and coaching errors," said Casy Rowell, head coach. "I set the defense in something they shouldn't have been in right off the bat, and we weren't very run sound early. We were expecting the pass and just got exposed in our pass defense with the running game."

Rowell said he took ownership of the first couple of Dickson scores that saw the Comets take a 13-0 lead in the first quarter.

He said he and his staff have learned from the mistakes, and it will make them a better football team.

"The fact we can be down (13) points and come back is awesome," Rowell said. "No matter what happens from here on out, we know we can come back."

The adjustments that were made were fairly simple but effective.

"We were in a pass defense and switched to more like a run defense," Rowell said. "They had some pretty good receivers, but we matched up pretty well with them and we were still able to cover them in that pass defense."

Once they were able to shut down the run game, they were then able to force them into the passing game.

"Once we did that, we had some good plays at the corner and in the secondary batting some balls down," Rowell said. "I also think the longer the game went on, the more it played to our advantage as far as conditioning goes. I feel like we wore them down, so things that weren't opening up in the beginning we're opening up in the second half."

Comanche finally got on the scoreboard in the second quarter on a 17-yard touchdown pass to Bryson Evans from quarterback Kooper Doucet to cut the lead to 13-6.

The Indians were not done, however. Doucet went right back to Evans on the next drive. On the first play, the two connected for a 33-yard pickup and then on the second play, Doucet and Evans teamed up again. This time it was a 23-yard touchdown pass.

Evans would finish with 10 receptions for 135 yards and two scores.

It would prove to be the momentum shift the Indians would need going into the second half on both sides of the ball. As the offense put points on the board, Comanche's defense came up with five turnovers - three fumble recoveries and two interceptions - that would allow the Indians to stay in the game to complete the comeback. It also helped Comanche had no turnovers in the game.

In the third quarter, Comanche tied the game on a four-yard touchdown run by Doucet and then Doucet ran in the two-point conversion to tie the game.

The Indians' next points to take the lead may have come from an unlikely source.

In the fourth quarter, kicker Kyler Johnson, who had just joined the team four days before, booted a 24-yard field goal after missing both of his extra-point attempts earlier in the game.

Rowell had found Johnson, a sophomore, in his biology class. Johnson had not been active in sports but has several friends on the team, and he decided to give it a shot.

"Like I said last week, there had to be a kid out there walking the halls who could kick a ball through goalposts, and we found him," Rowell said with a laugh. "With him just coming out Monday, he had to have four days of no pads, so Friday was the first time he put on pads. He also said he didn't want to tackle anybody, but Dickson broke one return and he went and wrapped the kid up until he got some help."

It was a lesson he hopes all students can learn from.

"It just goes to show you what can happen when you step out of your comfort zone and do things like football, wrestling or cross country or whatever," Rowell said.

Comanche's final touchdown came with 10:05 left in the game. Sophomore linebacker Colton Newton had picked off a pass and returned it to inside the 10-yard line. The Indians thought he had scored, but the official said he had stepped out of bounds. Two offensive plays later, Evans ran in from four yards out. Johnson added the extra point to extend the lead to 10 points that would make the final, 30-20.

"They like to line up in an I-formation with two tight ends and run it at you," Rowell said.

The coach said the main focus this week will to concentrate on making his own team better.