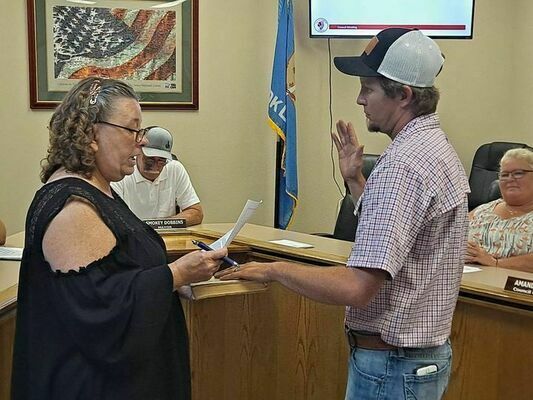 Austin Myers was sworn in as the newest member of the Comanche City Council and Public Works Authority at last Tuesday’s meeting.

Myers was appointed by the current members to replace Cne Geraghty, who resigned in July because she was moving out of Ward 4.

One of the first orders of business was to discuss the issue with residents putting out oversized and an abundant amount of limbs and brush for the city to come to pick up. City manager Chuck Ralls said the limbs were too long for city workers to deal with safely and it was time-consuming.

The ordinance states the brush can be no longer than four feet in length and 1 1/2 cubic yards in order to be removed for free. It will be picked up once a month. Residents must call in to have the waste picked up and if not on the list, it will not be picked up. There will be a charge of $50 for removal for each cubic yard over the 1 1/2 cubic yards.

In another matter dealing with residences, the council voted to change the permit threshold for improvements and renovations to existing homes and buildings from $500 to $5,000. There are some restrictions such as the renovations and improvements cannot add square footage to the existing structures.

The council also passed a resolution allowing city manager Chuck Ralls to speak with and assist the motion picture and television industries on behalf of the city.

Ralls said there are movie studios coming into Oklahoma looking for places to film. The resolution would also allow the city to be listed on a state registry for cities that would be agreeable to having movie and television productions.

Ralls said he felt Comanche could offer some things other cities in Oklahoma could not.

“You could make a thriller at Comanche Lake,” Ralls joked.

During the city manager’s report, Ralls said he had been having some rough conversations with the company that is supposed to be doing sidewalks. The project has already had several delays and after telling Ralls the company was going to start on Aug. 9 following a death of a family member of the company that it was now going to be pushed to Aug. 16.

In other city council business, the board voted to purchase a new diesel lawnmower for the golf course at a cost of just over $16,000. Half of the funds would come from the hunting and fishing fund and the city would finance the rest through Kubota and make payments out of the land management account.

The council also voted to extend the construction deadline for Scissortail Meat Company LLC on their building after being asked for an extension by the company to Dec. 31, 2021.

In other business, the council voted to call a special work session for Aug. 24 to discuss plans to utilize funds for the $287,000 it will receive from the federal American Rescue Fund plan.

In the Public Works Authority meeting, Myers was officially appointed as a trustee.

The trustees then approved the purchase of new transformers in the amount of $16,816 to be paid from the capital improvement sales tax fund.