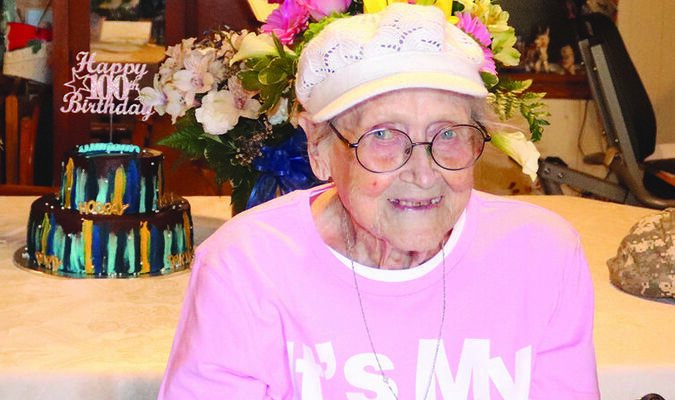 Oklahoma had only been a state for 14 years when Josephine Ruth Hensley was born Jan. 13, 1922 in Jefferson County. Warren G. Harding was president and the country was enjoying the prosperity of the Roaring 20’s.

Last week, she welcomed well-wishers to her 100th birthday celebration at her daughter, Kay Strickland’s home in Duncan.

It was originally supposed to be a birthday bash in Comanche, but due to COVID concerns, they decided to cancel it.

Still, she took a few moments to fondly remember what it was like growing up in rural Oklahoma.

The first family car was a Model T.

“One Saturday after my father had bought it, he took my older sister out when she was 14 and taught her to drive it in one day,” Hensley said. “The next Monday, she drove us to school.”

A few years later when the car was needed for deliveries, she and her brother would ride to school on horseback.

She remembers living through the depression though she says she and her brother and her siblings never knew they were poor as their parents did their best to provide. Her grandmother would send them $10 a month to purchase staples.

“We didn’t have electricity, but we never went hungry,” Hensley said. “We played games like dominoes and stuff, but when I was little, I remember dad reading these range romances. We couldn’t wait for him to get there and sit down so he could read to us. There really wasn’t much else to do.”

She would graduate from Ringling High School in 1940 before she moved with her family to Comanche.

“My dad traded our home in Ringling for a laundromat in Comanche,” Hensley said. “It had three rooms off from the laundromat and that’s where we lived. People would come and drop off their laundry and we would do it for them. It was five cents an hour.”

She didn’t mind living in a laundromat, though.

“It was nice to have electricity and a bathroom,” Hensley said.

After about five years, her dad, Richard T. Fletcher, had saved up enough money to buy property south of Comanche.

She married salesman Euther “Mike” Hensley on Jan. 1, 1944. They lived in a house on Wilson Street in Comanche. She was a seamstress and a homemaker, taking care of their five children - Don Leach, Jimmy Hensley (deceased), Jerry Hensley, Kay Strickland and Billy Hensley. They were married 49 years before Mike’s passing. She has 12 grandchildren, 24 great-grandchildren and 12 great-great-grandchildren.

Women had only had the right to vote for two years when she was born. Her first vote for president was cast for FDR.

Hensley attended Baptist and Methodist churches and is still proud of her involvement in the Odd Fellows Lodge Rebekahs, where she had various opportunities to volunteer and served as district deputy president.

They owned a skating rink in Comanche for a little while.

She loved to fish and go camping. She has beaten both cancer and diabetes and can recall many memories.

“I think I’m doing pretty doggone good,” Hensley said. “I’m glad my mind is still in pretty good shape. It might not be for what I did yesterday, but it still is for what I did three or four decades ago. I had the five most wonderful kids in the world. We lost one when he was about 60, but his grandson goes to school in Comanche.”

And for her words of wisdom: “Family always comes first and learn to forgive.”