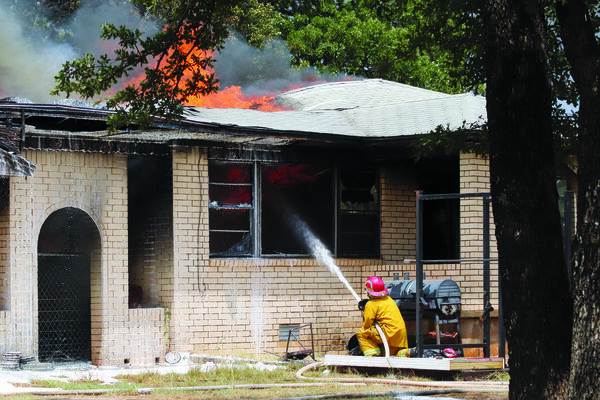 The burning of boxes was the possible cause of a fire that burned a large tract of land between Wisdom and Old Refinery roads in Meridian last Wednesday.

The Comanche Volunteer Fire Department was one of many departments that responded with mutual aid.

“We responded just as mutual aid on the house fire,” said Scooter Bivins, “I don’t know what all happened. All I know is the guy told me he was burning boxes in the backyard and he had come in the house for a minute, went back out and it had taken off. I left it at that because it was not my fire and I don’t know what all has been done with that.”

Comanche did bring a big response with seven units total on the scene, including four tanks, two brush trucks and an engine.

The firefighters battled the temperatures as well as the fires. One Meridian firefighter had to be taken to the hospital for heat-related problems though he has since been released.

It was rough going starting out for the fire department. There was little response at first.

“It was in the middle of the day and most everybody was at work, so we had to keep paging out for more people,” Bivins said.

They could not enter the house at first to battle the blaze because they did not have the recommended number of firefighters on the scene, so they remained outside until more help arrived

None of the home’s residents or pets were harmed during the fire.

The department also responded to a fire the day before at Clear Creek for a mutual aid call. Since the beginning of the month, the Comanche Fire Department has responded to 27 fire calls, including rekindles. In the past seven months, the most calls in any month was 16.

This is why, Bivins said, it is important for people to remember there is a countywide burn ban.

“I don’t know if people just aren’t adhering to it or I’ve heard some say they didn’t know about it,” Bivins said.

The community also responded. Two local businesses set up donations for the fire departments and the four men whose residence burned down.

Hollie Harkins, owner of Hollie’s Sweets and More, has her shop at the intersection of Old 81 and Old Refinery Road in Meridian. Harkins was appreciative of the efforts of the firefighters, so she set up a donation site for the fire departments.

Harkins said donations had not been going well so far, but that she was optimistic that they would pick up. She is collecting water, Gatorade, snacks such as crackers and protein bars.

Those wishing to donate can drop off donations at the shop or can donate money electronically through PayPal, Venmo, or mail a check or drop off cash.

Jennifer Hinsley of Red Diamond Fashions set up a clothes donation point at her store in downtown Comanche for the victims of the house fire. She said donations have been going well.