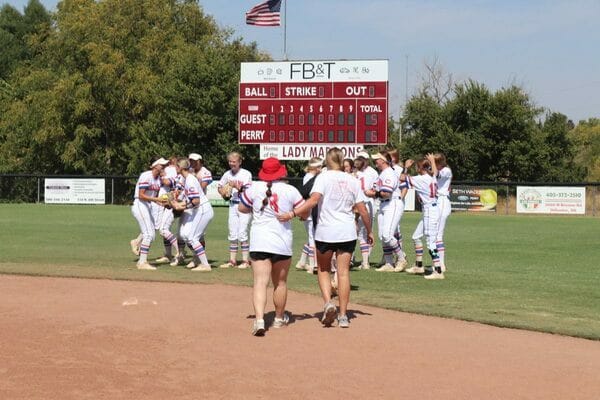 PERRY - The ball from the Perry batter sailed deep into the outfield, but Comanche center fielder Raylee Chaney had it squarely in her sights. The ball traveled harmlessly into the waiting junior’s glove and the celebration began.
The Comanche Lady Indians had won the regional tournament and punched their ticket for the Class 3A state tournament for the second year in a row with a 6-5 victory. Not bad for a team that before 2021 had not been to the state tournament in 32 years.

Comanche had tied for the district title with Lindsay but lost on the tiebreaker, meaning they would have to travel instead of hosting the regional tournament.

“From the get-go, I knew this was a special team and the expectations were to get back to the state tournament,” said Aaron Minor, head coach. “We went through the part of the season where we were kind of struggling, but I knew if we ever got turned back around that this team is good. It’s a special, special group.”

The game was tied at 5 heading into the bottom of the fifth inning when freshman Bre Gill literally used her head to put her team ahead for good. With the bases loaded and Gill at the plate, she took a pitch to the head that made a loud thud as it ricocheted off her helmet. Gill was fine and was laughing as she jogged down the first base line realizing she had just picked up an unconventional RBI to put her team ahead.
The Lady Indians (27-8) did not get an easy draw, having to travel 2.5 hours to Perry to play one of the top teams in the state. Perry (33-8) was one of just four teams in Class 3A with 30-plus wins on the season.

But after pulling out a 4-1 win over Perry on Thursday in the winner’s bracket, Comanche was exactly where it wanted to be on Friday, needing to only win one game. Meanwhile, the top-seeded Lady Maroon would have to win an elimination game before having to beat Comanche twice in a row in order to qualify for state.

A day after throwing a complete game to get the win against Perry, the Lady Maroon struck quickly against junior hurler Kamrey Rendon on Friday, scoring four runs in the first two innings. She was relieved in the third inning by Josey Harris who only allowed a one run the rest of the way to give her team a chance to get back in the game.

“That doesn’t surprise me from Josey,” Minor said. “We were riding Kam(rey) because she had got hot there at the end of the season. They got on her a little bit today. Josey is a good pitcher and I had complete confidence when I brought her in to keep them down. It was just a matter of us scoring runs at that point.”

Perry started the game off with back-to-back home runs and then added one more to grab a quick 3-0 lead.

In the second inning, it was back-to-back bloop doubles that added another run and a 4-0 lead.

Comanche struck back in a big way in the bottom of the third. Comanche had not shown a lot of power most of the season, but it was three big home runs on Thursday that led to both wins.

Friday would be more of the same. Jaelyn Reed bunted her way on with one out, followed by a walk to Gill. Chaney then stepped to the plate and the left-handed hitter took the ball over the right field fence to cut the lead to 4-3.

The Lady Indians were not done. Mykayla Slovak reached on an error and Jentry Whaley would make the Lady Maroon pay with deep home run to left-center field to give Comanche its first lead of the game at 5-4.

After a scoreless fourth inning, Perry tied the game in the top of the fifth with an RBI single.

In their half of the inning, Comanche got the run back when Gill was plunked with the bases loaded.

That would be all Harris would need. The Lady Maroon threatened in the top of the sixth with runners on first and second with one out, but she got out of the jam when shortstop Gracee Miller got a line drive and tagged second for an unassisted double play.

In the seventh, Perry had the tying run on second with two out before Chaney caught the third and final out and to send the Lady Indians to state.

“It’s just incredible, the health of the program right now,” Minor said. “It’s a special deal. Our program is right at the top right now.”