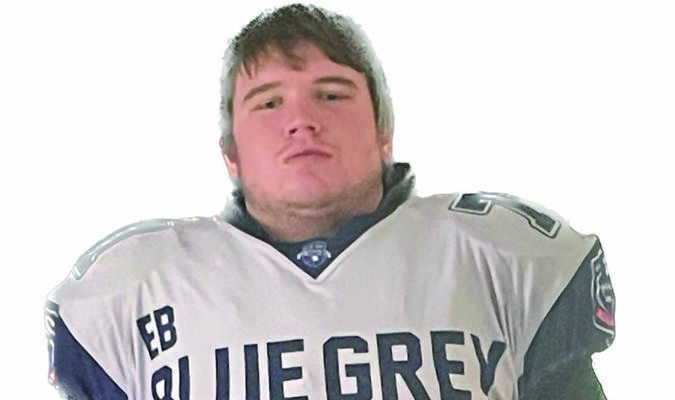 Comanche senior Cade White got an opportunity not too many football players get and he relished every moment of it when he was selected to play in the Blue-Grey All-American Bowl in Dallas at AT&T Stadium last month.

White, who as of press time was scheduled to sign with Kansas Wesleyan on Wednesday, played right guard on his squad.

“When I walked out there that first practice, you get put into five little groups,” White said. “I was introducing myself and going ‘What’s your name?’ and one guy is committed to SMU and another guy across the line is committed to SMU. So, all of those guys are going somewhere and it was a real eye-opener to what my life is going to be like in college.”

He also didn’t take the coaching for granted either.

“My line coach played at Texas and had a national championship ring and two Super Bowl rings,” White said. “I was just soaking up everything everybody was telling me.”

His team won with a flurry of late fourth-quarter scoring, but he is taking more than just a win from the experience.

“My biggest takeaway was not to be intimidated,” White said. “We had that first drive and everyone is talking about this Auburn commit on the other side. I go up to the line and he’s like 6-8 and 385 pounds, he was huge. I am 6-3 and weighed about 280 then and the center was about 5-9 or 5-10 and we were able to move him. I happen to have a technique where I can get you places no matter how big or strong you might be. I was glad to get those jitters out of the way because when you are walking in there, you’re going ‘Man, these are all going to be good.’ Just getting those jitters out early kind of let me open up the rest of the game and play the way I wanted to play.”

He had to get some wrestling out of his system when he first showed up to practice. White had competed all day Friday at the Southern Oklahoma Invitational in Duncan and then had to switch gears to football the next day.

“It’s a different mindset,” White said. “In wrestling, you’re aggressive, but on the offensive line, you kind of have to sit back a little bit and let them come to you. It took some time to get the rust off for football coming from wrestling season. And the coaches were like all former NFL players and they’re out there using NFL terminology. It takes a while to catch up. We had four hour practices. It was a slow pace, you know because we were trying to learn the playbook.”

White was pleased overall with his performance.

“I think I gave up two quarterback pressures in the game,” White said. “I thought I played pretty good for the level I was playing at.”

Others noticed it too. The Blue-Grey All-American Bowl tweeted out: “Upon Further Review: Cade White and Joshua Wilhite earned the respect of their peers during the brand’s All-American Bowl at Dallas Cowboys’ AT&T Stadium.”

mom and dad,” White said with a laugh. “Your mom and dad, no matter how you played, are going to tell you you did a good job. You see people who organized it tweet it out, the people that invited you, you realize they invited you there for a reason. For you to play hard and play ball and just getting the satisfaction of them tweeting that out is great.”

And getting the chance to play in AT&T Stadium was not lost on him either.

“That place is huge,” White said. “You’re just standing there looking around. The big screen goes from one 25-yard line to the other 25-yard line. We went in this room where they have turf for every week of the season. You think this turf cost $1.5 million to $2 million and they have one for every week?”

He also enjoyed the locker room.

“You sit there and think that Tom Brady may have sat where you were sitting,” White said.

For now, White is in wrestling mode for the rest of the season as he looks to add a state championship to his already impressive football resume.