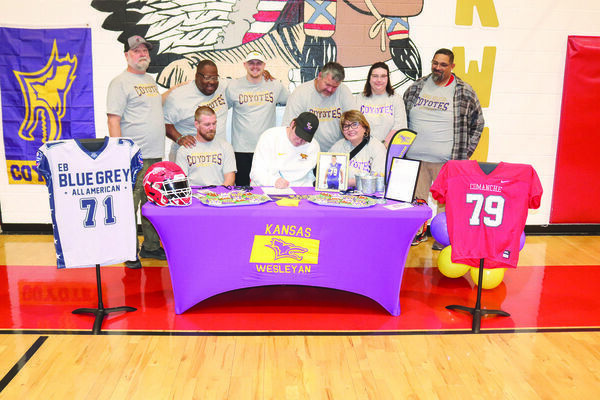 Kansas Wesleyan was always near the front of the pack when Cade White was navigating his way through the football recruiting process. Last Wednesday, the Coyotes got their man when White signed with the NAIA school in Salina, Kan.

“It’s a great community up there and I’m proud to be a part of it,” White said of his decision to attend Kansas Wesleyan. “It’s a Christian university and it just makes me think of the reason I’m doing this is to put God first in my life and be surrounded by people who want to do the same thing. I really like the coaching staff and I made a really good connection with them when I visited. It’s a top quality program. I just feel with the athletics and academics, that’s the place to be.”

White started coming on college coaches’ radars after his junior season. He did nothing but help his stock as he attended camps, where he had some good performances going against players from larger schools.

White will be playing on the line, more than likely at right guard for the Coyotes. He plans to go in and fight for playing time as a freshman.

“I think securing a starting position would be awesome and helping the team win championships and make a long run in the playoffs,” White said.

Kansas Wesleyan had also made him one of the better offers he received, which played a part in the decision.

“It’s a blessing for me and my family for me to get an education and to make it affordable so I won’t have to go into debt,” White said.

The Coyotes went 8-3 last season. The three losses were only by a combined 16 points.

His high school coach Casy Rowell saw White play his whole career through junior high, but said there is much more to White than just football.

“It goes beyond just being a player,” Rowell said. “On the field, he handles his business. During Christmas break he was out coaching our youth tournament wrestling team. He’s a special kid and it’s a special moment for me right now to see him to be able to do this.”