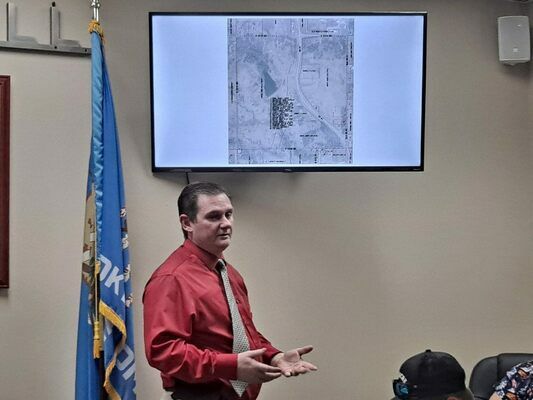 “If you’re not growing, you’re not expanding, you’re dying,” said Chuck Ralls, city manager, to those in attendance. Some in the crowded City Hall Chamber were opposed to it, some wanted to know exactly what areas it covered and others wanted to know the reasoning behind the proposal.

Ralls said there is industry wanting to come into Comanche but there is no place for them to go.

The plan would be for developers to come into the city to build subdivisions with $180,000 to $200,000 homes. The city would not build them and it would not be low-income housing. The purpose of owning the rest of the mostly agricultural land is so the city could control what comes in there.

“We don’t want to have 20 grow houses coming in and devaluing those homes,” Ralls said.

Ralls said there is a market for the homes. People are leaving cities and looking to live in smaller communities. He also said having the housing developments would lead to industries with higher paying jobs moving into the area.

“We are are struggling with workforce here,” Ralls said. “We have people needing new employees. We have a meat processing plant coming up. We have five vacancies in the city. There is no workforce here. We can’t get a workforce here because we have no homes. The homes that are available are so dilapidated, that (people) aren’t willing to purchase and invest in them. Or, it’s a decent home with something not nice next door.”

The plan would create new development over the next three to five years. The first phase would be the part north of Dr. Pepper Road near Delbert’s.

“We already have electric and water services to that area, so it would be very easy for us to get something in there quickly,” Ralls said. “Whether we create 20 homes or 50 homes, that is to be determined.”

The goal of the plan is to position Comanche for a successful future.

Ralls said the city would be looking to get TIF grants to help with the costs.

“It’s Tax Increment Funding,” Ralls said. “There’s a payback over a period of time that would not put any burden on the citizens to pay for the debt that we’re getting. We’re not going to go that route. It will be self-funded. But, if we create the infrastructure, put in the water, the electric and put in roads, then a developer is going to be more enticed to come in more quickly and make a larger investment.”

One woman said that the city doesn’t have the jobs to support someone purchasing a $200,000 home.

“That’s been the mindset for too long,” Ralls said. “People don’t think we can create jobs or create industry. I mean, the meat processing plant is going to be paying $25 or $30 an hour. You have a lot of people that are retiring from California and Tulsa, and their retirement is going to go a lot further with what we have here, so they’re going to be able to go to Main Street and spend those retirement dollars because they sold their house in California for $2 million.”

Ralls said there is industry already wanting to come into the area, but the city has to be willing to make the choice to expand.

During the city council meeting, the council voted unanimously to annex the property and provide for an extension of municipal services.

In other business, the council approved establishing and implementing a program to charge mitigation rates for the deployment of emergency and non-emergency services by the fire department for services provided by the department.

Ralls said the insurance companies of those needing the services would be billed. Individuals would only be billed if there were no insurance involved.