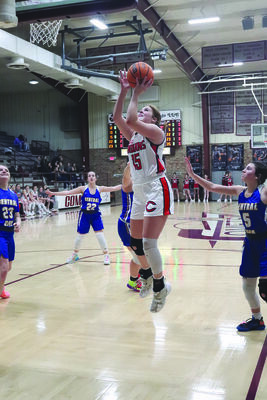 The Comanche girls got off to a slow start offensively, but their pressure defense carried them in the early part of their opening game at the Stephens County Tournament held at Velma-Alma on Monday.

The Lady Indians held Central High scoreless in the first half and ran away with a 39-7 victory to set a semifinal match-up with Waurika, a 54-33 winner over Ryan, on Thursday at 4 p.m.

It took nearly three minutes of game time for the first points to be scored as Comanche held a 5-0 lead at the end of the first quarter.

The Lady Bronchos set up in a box-and-one defense with one player dedicated to cover the Lady Indians’ leading scorer Gracee Miller while the others played a zone. It did work in the first quarter, but the Lady Indians, the No. 3 seed, made some second quarter adjustments to get their offense rolling. They outscored Central High, the No. 6 seed, 16-0, in the quarter to take a 21-0 halftime lead.

In the third quarter, Comanche had built a 31-0 lead when Central High’s Ruthie Hargrove knocked down a three-pointer for the Lady Bronchos’ first points of the game. Comanche went on to take a 36-5 lead into the final quarter.

Substitution players played the entire fourth quarter for Comanche as coach Megan Robbins rested her starters for the long week ahead.