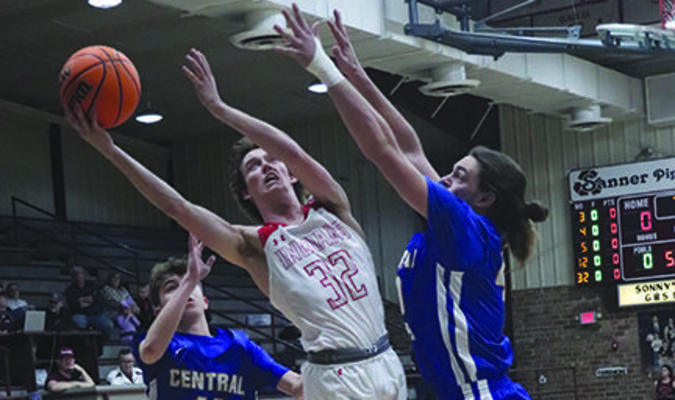 There were times during the Comanche and Central High boys game Tuesday where Comanche coach Anthony Bowie just shook his head at some of the things happening on the floor. The Indians, however, would put a smile on their coach's face in the end as they held off a tough Central High team, 49-43, in the first round of the Stephens County Tournament at Velma-Alma High School.

The Bronchos had an obvious size advantage, which they used to counter Comanche's smaller and quicker team.

Comanche, the No. 5 seed, led by as many as 10 points over fourth-seeded Central High twice in the third quarter, but could not get the push it needed to put the game away.

There were two ties and four lead changes in the game. The Indians led the entire second half and got a couple of big buckets when the Bronchos had narrowed the lead to one point on two different occasions in the fourth quarter.

The first came from Myles Ellis with 2:15 left in the game. Comanche was up 39-38 before Ellis, who had not scored all night, got his first bucket of the game to push the lead back out to three points. After Central High answered on a basket by Ethan Brummett to cut the lead to 41-40, Dillon Ellis made a basket to push the lead to 43-40 with 1:45 to go.
The game belonged to the Indians from that point on as they scored six straight points, including a 4-for-4 performance by Corbin Bowen at the free-throw line, to push the lead to nine points. Central High knocked down a three-pointer at the buzzer to make the final score, 49-43.

The Indians will now face rival Marlow, a 87-38 winner over Bray-Doyle at 8 p.m. on Thursday in the semifinals. In other games Tuesday, Waurika beat Empire, 59-55 and Velma-Alma defeated Ryan, 72-46.