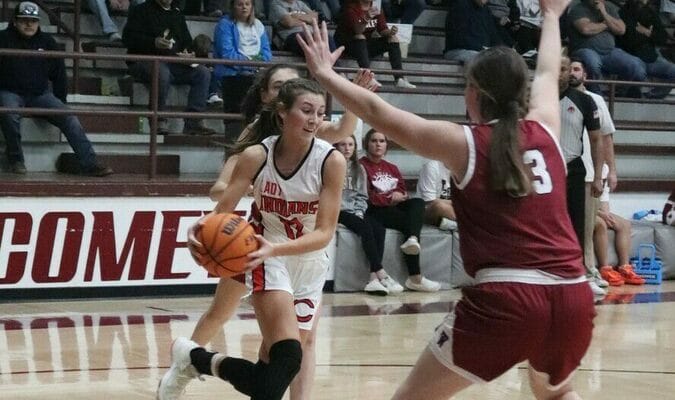 The focus of Waurika on defense in Thursday’s Stephens County Tournament semifinal girls’ game was Comanche’s Gracee Miller as they challenged the rest of the Lady Indians to step up. Kylie Roden and Kamrey Rendon did just that as the Lady Indians downed the Lady Eagles, 46-33, to advance to Saturday’s 6 p.m. final against the winner of Thursday night’s Vel/ma-Alma and Marlow game.

“They played really well,” said Megan Robbins, Comanche head coach. “It’s nice when we can get them in double digits.”

Comanche, the No. 3 seed, shot out to a 14-3 lead in the first as Rendon and Roden combined to knock down five three-pointers in the quarter.

The Lady Eagles, the No. 2 seed, were able to find a little bit more of offensive rhythm in the second quarter and Comanche’s three-point marksmanship cooled off, allowing Waurika to cut the lead to 26-16 at halftime.

In the third quarter, Rendon scored nine of Comanche’s 10 points as the Lady Indians extended their lead to 13 points, 36-23, heading into the final quarter.

In the fourth, Miller was finally able to get loose on the offensive end as she scored seven of her 11 points in quarter. An 8-0 run in the quarter sealed the win for Comanche.