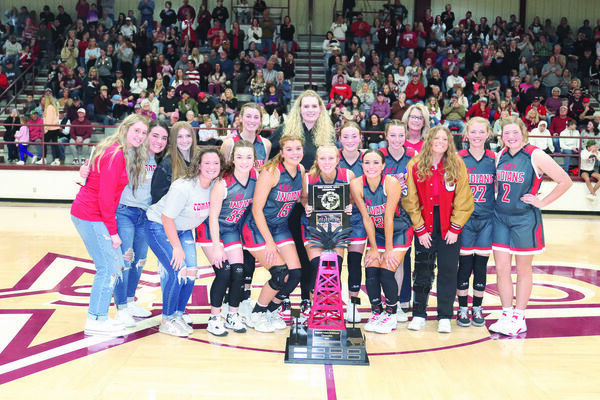 The Comanche girls basketball team has been in three championship games this season. The first two were losses, but they finally got over the hump by winning the Stephens County Tournament championship over Marlow, 38-30, last Saturday at Velma-Alma.

The lead changed hands a few times in the first half with Comanche, ranked 17th in Class 3A, leading 11-7 at the end of the first quarter, but Marlow, ranked 12th in Class 3A, took a 14-13 halftime lead. Comanche, though, came out in the third quarter to retake the lead and keep it the rest of the way.

“I think during the critical times tonight that a different person stepped up every time, so when you have a team like that, and when you have different people continually stepping up you are going to have a special team,” Robbins said.

Jentry Whaley hit a buzzer-beating three-pointer in the third quarter, Gracee Miller had a steal and a layup at another crucial time. Breelie Garlinger, Kynli Morris and Kamrey Rendon, who had not scored all game, also came up big in the final minutes to help preserve the win. Garlinger hit a mid-range jumper, Morris completed an old fashioned three-point play and Rendon knocked down a pair of free throws.

Robbins sees the tournament overall as good for her team, which has won four of its five past games. The Lady Indians came into the tournament as the No. 3 seed and beat both the top two seeds (Marlow and Waurika) to win their second straight county title.

The loss came at home against Dickson right before the tournament which Robbins admits her team did not play well.

“(The tournament) is good for our confidence,” Robbins said. “They didn’t play their best against Dickson and they know that they can’t let that happen because everyone is going to be gunning for them every single night. I think this is a team that doesn’t quite understand the potential they have. You are seeing the sophomores slowly figuring it out and saying, ‘Oh, I can knock this down, I can play in the big time.’”

Robbins said she knew at the beginning of the season it was going to take some time for the team to start playing to their potential.

“We have so many kids this year that haven’t had a lot of experience in the past,” Robbins said. “I’ve kept saying it’s just going to take a while. But, once they get that experience under their belt, don’t count us out.”

There were plenty of post tournament awards for the Lady Indians. Kylie Roden and Morris were named to the all-tournament team. Whaley was named as the “Sixth Man Award” winner and Miller won her second straight county tournament MVP.

The focus of Waurika on defense in Thursday’s Stephens County Tournament semifinal girls’ game was Comanche’s Gracee Miller as they challenged the rest of the Lady Indians to step up. Kylie Roden and Kamrey Rendon did just that as the Lady Indians downed the Lady Eagles, 46-33.

Comanche, the No. 3 seed, shot out to a 14-3 lead in the first as Rendon and Roden combined to knock down five three-pointers in the quarter.

The Comanche girls got off to a slow start offensively, but their pressure defense carried them in the early part of their opening game at the tournament on Monday.

The Lady Indians held Central High scoreless in the first half and ran away with the win.