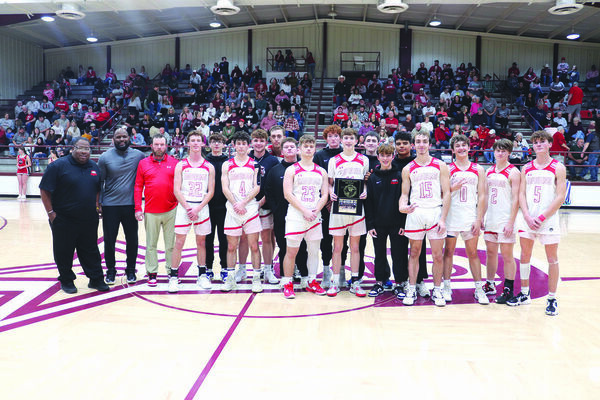 After trailing by four at halftime to Waurika in the third-place game of the Stephens County Tournament, the Comanche Indians came out more aggressive in the second half and it paid off as they rallied for a 52-40 win over the Eagles on Saturday at Velma-Alma.

“Our plan was to come out, be aggressive and trap number two (Treyton Torrez), he’s a really, really good player,” said Anthony Bowie, Comanche head coach. “We weren’t able to do that in the first half, but in the second half we got out there and challenged them a little bit because we knew we were better than the way we were playing. We had to go back to our training and preparation.”

Over the course of the tournament, the coach thought his team played well. They opened with a win over Central High on Tuesday and then fell to eventual champion Marlow in the semifinals on Thursday.

“I thought we played well,” Bowie said. “I told them when we feel like we have things figured out, we can win four, five or six straight games. There’s still going to be lessons to be learned along the way. We knew it was going to be a tough tournament. We were in some uncomfortable situations sometimes that we’ve got to learn to come out of. We are just trying to let the guys know there is always going to be a progression and even when we feel like we do have things figured out, there will still be more room for progression.”

It was Bowie’s first experience with the Stephens County Tournament and he was very pleased with how things went.

There were three ties and three lead changes in the game before Comanche took the lead for good in the third quarter.

The final lead change came with 3:13 left in the third when Colby Shannon came off the bench for Comanche and knocked down a three-pointer to give his team a 34-31 lead.

It would be the beginning of a 21-9 run to close out the game. The Indians got a big boost from junior post player Hunter Lassley, an all-tournament selection, in the fourth quarter. He scored 10 of his team-high 17 points in the quarter, which included an offensive putback off a rebound and two old fashioned three-point plays.

The Indians hung tough with one of the top 10 teams in Class 3A for a quarter, but could not hold on as Marlow turned a 10-point halftime lead to a 23-point win.

At the beginning of the second quarter, Myles Ellis hit a jumper to cut the Marlow lead to 12-11, but that would be as close as they would get the rest of the way.

There were two ties and four lead changes in the game. The Indians led the entire second half and got a couple of big buckets when the Bronchos had narrowed the lead to one point on two different occasions in the fourth quarter.

The first came from Myles Ellis with 2:15 left in the game. Comanche was up 39-38 before Ellis, who had not scored all night, got his first bucket of the game to push the lead back out to three points. After Central High answered on a basket by Ethan Brummett to cut the lead to 41-40, Dillon Ellis made a basket to push the lead to 43-40 with 1:45 to go.
The game belonged to the Indians from that point on as they scored six straight points, including a 4-for-4 performance by Corbin Bowen at the free-throw line, to push the lead to nine points.