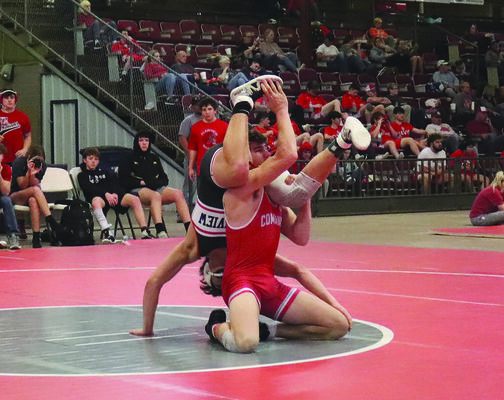 The right to go to Dual State was settled in the first dual match of the day when Sulphur knocked off Comanche, 41-31, on their way to claim the district title and a trip to the Dual State Tournament.

The Indians went on to finish 5-1 as a team, but it would not be good enough to advance. It will be the first time the Indians have missed Dual State since 2015.

“I thought we wrestled fine,” said Casy Rowell, Comanche head coach. “Sulphur has a good team and they’ve been building it. They got a bunch of kids from that area committed to that coach and they put together a good team. We knew we matched up tough with them. Wrestling is all about match-ups. There are 14 weights, so, a pin and a forfeit are the same thing - six points.”

Rowell said they were able to come back against Class 5A No. 1 El Reno a couple of weeks ago when the Indians were down big, but didn’t have that luxury this time around.
Sulphur bolted out to a 29-0 lead with wins on the mat and wins by forfeit.

“At El Reno, we got the win at 150 and at heavyweight and we didn’t get that this time around,” Rowell said.

Comanche got on the scoreboard at 138 pounds when Jack Newton won in overtime.

It would be 38-3 before Comanche got on the board again. Noah Presgrove won by decision before Kasen VanBuskirk, Logan Bain and Kooper Doucet all won by pin.

As far as the team score was concerned, it would be too little, too late, however as the Bulldogs carried an insurmountable 38-31 lead into the final match, which the Bulldogs also won by decision to take the 10-point win.

“With some forfeits in the lower weights we’re behind right out the door,” Rowell said. “We were able to still get wins against Cache, Elgin and El Reno. We’ve got to get more kids involved in wrestling and being committed. It’s tough, but credit Sulphur, they did a great job. They were a tough team to beat and we fell a little short this year. Us and Sulphur are way above the other teams in our district right now.”

While the Indians may not be going to Dual State this year, Rowell sees a silver lining being able to get his team ready for regionals and the state tournament.

“I’m excited about getting to train a little differently,” Rowell said. “We’ve always wrestled good at districts these last several years and we’ve lost in the first round the past couple of years. When you train for Dual State, you have to train a little different than you do training for regionals and the state tournament, so I’m excited about that part of it. We will train a little bit different and maybe surprise some people because we really don’t have the numbers for Dual State, but I feel really confident about our tournament team. I think we have some individuals who can do something special and it’s’ exciting.”