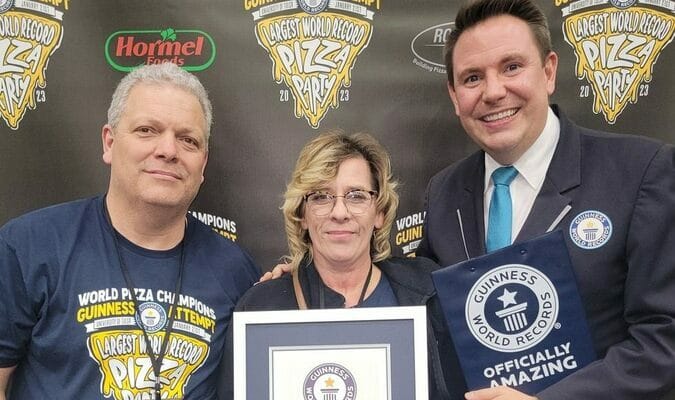 Editor's Note: The original article has been updated with additional information and quotes.

A world record was set for the world’s largest pizza party on Jan. 21.

The event was organized by Andolini’s Pizza and the World Pizza Champions group, bringing experts in from all over the country and the world, including Dennis and Dana McQuinn, owners of Tribe Pride Pizza in Comanche and DYO Pizza in Duncan.

The owner of Andolini’s, Mike Bausch, said the record is all about community. “I like everyday people coming together to do something that’s special, that anyone can just walk in here today and leave a Guinness World Record holder and I think there’s something to be said about that,” he said.

The record was broken at the Tulsa-Tulane men’s basketball game at the Donald W. Reynolds Center at The University of Tulsa. The previous Guinness World Record of 1,046 was established on Sept. 8, 2019, by Istituto Romano della Pizza in Rome, Italy. The Tulsa event more than tripled that record with 3,357 people.

The McQuinns saw on social media the event was going to happen and they made the drive to Tulsa and were originally going to be just a part of the record crowd.

“We were just going to buy tickets,” said Dennis McQuinn. “I told them if they needed any help to let us know and (Mike Bausch) is like, ‘yeah, come in.’”

Bausch owns more than a dozen pizza restaurants and they combined to make 850 full-sized pizzas, which were sliced down and served to the guests.

The McQuinns were in the main group handing out the pizzas.

“We were right in the middle and when the doors opened there was a huge rush, so people naturally started coming to our booth” Dennis McQuinn said. “It was fast paced. I would say we had everyone seated within 30 minutes.

Stewards from the Guinness Book of World Records would count empty pans of the people once they got up to leave the tables.

“It was a blast,” McQuinn said of the experience. “Mike had really publicized it for two or three weeks inviting everyone to come set the world record.”

There was an after-party at the location

“Our mission at Make-A-Wish is that together we create life changing wishes for children with critical illnesses and this is what together looks like, Tulsa came out and showed up today,” she said.

Participants in the event along with event sponsors combined forces to raise $42,000.

Michael Empric, an adjudicator with Guinness World Records, came from New York City to enforce the rules and see if Tulsa could pull it off. Before the record attempt began, Empric established the ground rules. Participants had to eat two standard-sized slices of pizza and drink a small bottle of water, fully finishing their portion in 15 minutes. If a participant could not finish their portion, they would not count towards the total. Empric explained. “We hold everyone to a very high standard at Guinness World Records. In this case, those are the guidelines, and everyone has to follow them.”

Once time was up, the results were tabulated. Building anticipation, Empric told the crowd, that they didn’t just beat the record, they tripled it and then some.

“You’re officially amazing,” Empric said as he handed over the official record-holder’s plaque to Bausch.

There was an after-party downstairs in the building where they set the record.

“Everybody’s down there,” McQuinn said. “All the crazy rednecks who came to get free t-shirts, sweatshirts and stuff.”

Afterwards they went to one of Bausch’s restaurants for another party just for event workers.

McQuinn said it has been an interesting experience being back home after people found out about it.

“I’m walking around and people I don’t even know are saying, ‘Hey, congratulations,’” McQuinn said.

Both Tribe Pride Pizza and DYO Pizza will get a plaque stating they were part of a world record.