Exchange students happy to have landed in Comanche 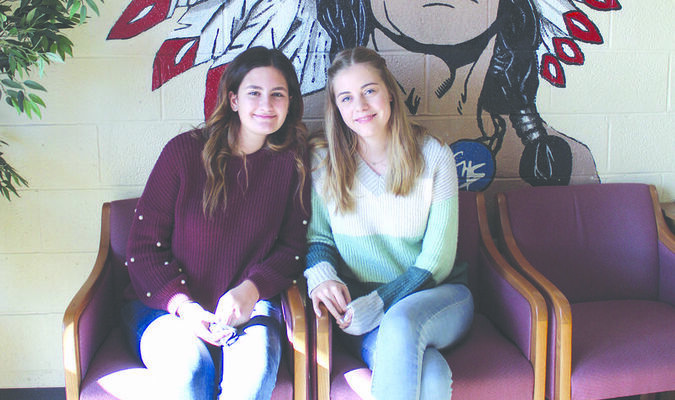 Benthe Robben and Fotini Verona may not have picked the best year to come to the United States to be exchange students, but they are making the most of their opportunity and have no regrets.

Benthe (pronounced Ben-ta) from Belgium and Fotini from Italy dove right into the Comanche High School lifestyle. There are differences and similarities in their personalities and reasons for coming to the U.S. to get a taste of Americana.

Robben, a senior, is more outgoing as evidenced by the fact she is an Indian cheerleader. Verona, a junior, admits she is shy and is using this experience to help her become more open.

Robben is from Gent, a large city in northern Belgium, and Verona is from a small town near Assisi, Italy.

“In Gent, its not big as far as wide, but there are a lot of people and everyone is so close together,” Robben said.

She said being an exchange student is something she always wanted to do.

“Both my parents did it, so they were happy I wanted to do it, too,” Robben said.

Verona comes from the opposite end, but still ended up in the same place.

“Both my parents came from strict homes and never had a chance to do anything like this, so they were excited when I told them I wanted to do it,” Verona said.

Both said their first goal was to learn English better, though they both still had their doubts when they landed on American soil. Neither one knew exactly where they were going to end up.

“We had been flying for 27 hours and when I got here I thought I wanted to go back home,” Robben said.

They both decided to stay, however. They are glad they did.

“It’s been amazing,” Robben said. “I didn’t get here until two weeks after school started, but everyone was so respectful. They say ‘Hi, how are you?’ and they treat you so good.”

“I really love this place,” Verona said. “I come here and everyone is so gentle. Everyone is trying to help me and helping me a lot. It is so much different than schools in Italy.”

With Christmas coming up, both said there are some slight differences in the way it is celebrated.

“The family comes together and we see friends,” Robben said. “We open presents and play games and do other fun stuff.”

“We open presents and go to lunch and then we come back and open more presents,” she said. “We eat typical food during the afternoon.”

Benthe has a brother and a twin sister in Belgium. Here, it is just her and a toddler who she calls her little brother.

“Everything is so much more peaceful here and more relaxed,” Robben said of living small-town life. in Comanche. “I really love it here.”

Both girls agreed one of the big changes they have encountered is just how big everything is.

“You go into Wal-Mart and you see these big jugs of milk and we just have these small ones,” Robben said.

They have both enjoyed living with their host families. For Robben it has been Cody and Mikayla Patino. Verona has been living with Jason and Elizabeth Albano.

“I didn’t realize what I was going to do when I got here,” Verona said. “I just knew I wanted to start a new life, make new friends and have the experience.”

When Robben landed in the U.S., she was given an option of going to Canada, but insisted on being placed in the U.S.

“The place didn’t matter, it was the people that was important,” Robben said. “I wanted to find a friendly place and it’s been amazing here.”

Robben’s remaining time is limited. She flies back to Belgium on Dec. 22 and will remain there to finish her schooling. She does plan to come back and visit in the summer.

Verona will be staying through Christmas and will remain in Comanche for a while.

Both had advice for those considering doing what they have done.

“I would say to do it and enjoy the experience,” Verona said. “I kept telling my friends in Italy they should do it, and now they are regretting not doing it.”