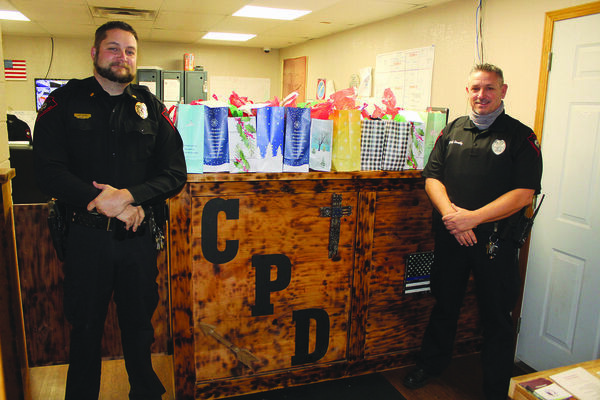 Police officers in the United States the past few years have been under a lot of scrutiny and received a lot of criticism, so a local group of residents wanted to let their local police department know how much they appreciated their work.

A group of Comanche citizens who did not want to be identified said they wanted the focus to be on the police officers and not the volunteers who spearheaded the effort.

“It kind of took off,” said one volunteer. “We were just going to do the Comanche Police Department which has 12 officers, but then people started asking about Marlow and Duncan and then someone brought up the sheriff’s department and it ended up being over 100 officers and deputies.”

She said she wanted to unite people and the more word spread of what they were doing, the more people stepped up to give to the gift bags that were to be presented to every officer and deputy.

She did say that when Jamie Battiest of First Free Will Baptist Church in Duncan heard about the idea, Battiest was the one who really got things going for the departments outside of Comanche by making phone calls to drum up support. Within a day, she had more than 60 officers sponsored.

“We wanted them to see they were supported by the community,” the volunteer said.

Ray of Hope Church in Meridian jumped at the chance to help as well.

People would pay to adopt a police officer for $25-$30 a gift bag. Some people would ask for specific officers to sponsor, but most just gave.

Viridian Coffee in Duncan matched money donated for gift cards to the coffee shop to double the amounts on the cards purchased.

Even specialized mugs were made with a “Support the Blue” logo on it for each officer.

The main thing, though, according to volunteers, is just for the officers to know they are appreciated and they do have people who support what they do.

Exchange students happy to have landed in Coma...