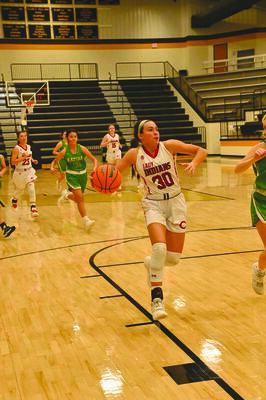 The Comanche wrestling and basketball teams are scheduled to resume action this week, though schedule changes and cancellations have become somewhat regular this season.

The season so far has been quite a scramble for the Comanche wrestling team. As assistant coach Keith Hare pointed out earlier this week, the Indians have yet to wrestle any tournament or opponent on their original schedule.

This weekend will be no different. Comanche was scheduled to make a trip to Geary for a tournament, but it was canceled, so instead the Indians will travel to Mustang to participate in an eight-team dual tournament at Mustang.

“We will be the smallest school there, so it will be a good experience for us,” said Casy Rowell, head coach. Other teams participating include Choctaw, Duncan, Edmond Memorial, Lawton MacArthur, Mustang, Piedmont and Tuttle.

It will be the Indians first action after Christmas break, but that does not mean the team has not been working hard in the meantime.

“We used the Christmas break to get some good work in,” Rowell said. “Christmas break is about dedication, sacrifice and a time to get better. They realized they had to get to work. Wrestling is a lifestyle. We did a lot of teaching and had extended practices. A good thing about Christmas break is after a hard practice you can go home and rest.”

Rowell thinks the Mustang tournament will be a good test for his team.

“It’s going to be a great battle,” Rowell said. “The goal is to try to get better every day. It says a lot about how our program is thought of that we were invited to participate in this. If I didn’t think we could compete then we probably wouldn’t be going.”

The first dual next Tuesday will also be another good challenge when the Indians travel to Blanchard for a three-way dual with the hosts and Perry, the team the Indians beat to end the Maroons long streak of winning state titles. Blanchard is ranked third in Class 4A, while Perry is ranked sixth in dual rankings and fourth in tournament rankings. Comanche is ranked second in dual rankings and first in tournament rankings.

The Indians are a young team and they are learning and getting better.

“We’re at where I think we need to be right now,” Rowell said. “I don’t want to peak too early. We are working toward the end of the year, and we’re heading in the right direction.”

Coach Megan Robbins makes a return to the sidelines after being out on maternity leave. She will coach in her first games this week after missing the beginning of the season. The team was coached by athletic director and former girls coach Sean Hushbeck during that time.

“I’m really appreciative of coach Hushbeck coaching the team while I was gone,” Robbins said.

Though she has been watching games on the internet, Robbins returned to coach the team in person last week and took her team through a couple of scrimmages against Davis and Alex.

“It was good to play those teams because they play the same defense as Lone Grove, who we play in the first round of the Lindsay tournament (Thursday, 1 p.m., at Leopard Arena),” Robbins said. “I know it hasn’t been easy for the girls to play for two coaches, but they’ve been real troopers about it.”

Robbins said the team is still trying to forge an identity.

“They’ve had to learn some new stuff,” Robbins said. “Our young players are stepping up and our seniors are showing good leadership. Shayson Hodges and Kenli Morris have both been playing well lately.”

Christmas break has also allowed Robbins to get back in the groove of coaching.

“For six weeks I was in ‘mom mode,’” Robbins said. “Now, I have to find a way to balance things out. I’m not getting much sleep and school is starting back, but I’ll figure it out.”

The community support has made things a bit easier.

“Comanche is such a great place to be,” Robbins said. “People kept contacting me and asking me what I needed. There is a lot of community support and I feel lucky to be here.”

As of Monday, the Indians (1-3) were practicing with a full squad and if everything goes well, they will have their full team for the first time all season this week.

“We’ve been working on executing on defense, playing hard and staying in staying in shape over the break,” said coach Caleb Patterson.

The Indians played a tough Community Christian team on Tuesday night. They open with Pauls Valley at the Lindsay tournament (Thursday, 3 p.m., at Leopard Arena).

“I think it is an evenly matched tournament,” Patterson said. “I could see us winning three games to win it all or lose three games. I think it will be that close. Any team could win it.”

Patterson knew he would have a young team when the season started and they are progressing a little better than he has expected.

“We’re defensively about where I thought we would be,” Patterson said. “Granted, we haven’t played a game with the whole team, yet.”

Lindsay tournament brackets can be found on page 5.