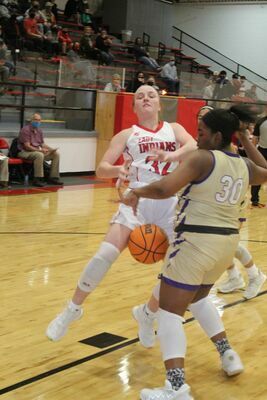 Caity Blair gets fouled going up for a shot. 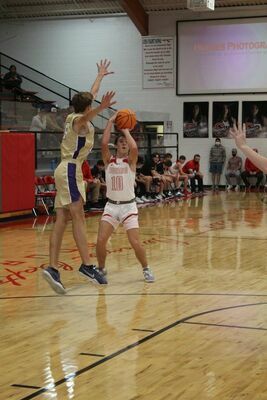 The Lady Indians gave coach Megan Robbins her first win as Comanche coach with a 61-46 victory over visiting Community Christian.
The Indians did not fare as well, dropping a 63-18 decision to the Class 3A No. 6 Royals (5-1), whose only loss was a nine-point loss to Class 4A No. 2 Heritage Hall.

However, three straight three-pointers to open up the second quarter by Comanche's Teagan Pineda, Gracee Miller and Jasmine Francis gave the Lady Indians the lead for good.

"I thought we played really good," Robbins said. "I thought we had a lot of energy and knocked down a lot of shots. I know that shooting has been a struggle a lot lately and we got into a groove and I thought that came from moving the ball a little bit more. We were able to attack and then get those inside-outside shots. They seem to go in a lot quicker when we attack the basket and then kick it out for threes."

The Lady Royals got the lead down to 25-22 with just over three minutes left in the second quarter, but it would be as close as they would get the rest of the game. Comanche closed out the quarter on a 9-2 run to take a 34-24 halftime lead.

In the second half, every time Community Christian was able to get a small run going, Comanche answered right back to push the lead back out to double digits.

A three-pointer by Francis to open the fourth, though, shifted the momentum back to Comanche and Community Christian was never able to get it back.

Gracee Miller led Comanche in scoring, pouring in 25 points and was 11-of-14 from the free-throw line (78.6 percent)
Scoring

Community Christian lived up to their high ranking as they steadily pulled away from Comanche throughout the game.

Landon Ellis tied the game at 2-2 in the first quarter on a layup, but it was all Royals from that point on.

Community Christian (5-1) led 20-7 at the end of the first quarter and held Comanche scoreless in the second to take a 41-7 halftime lead.

The Indians (1-4) had their best offensive quarter in the third with eight points with all eight coming from Myles Ellis, including a pair of three-pointers.

Community Christian went on to take a 56-15 lead into the final quarter.