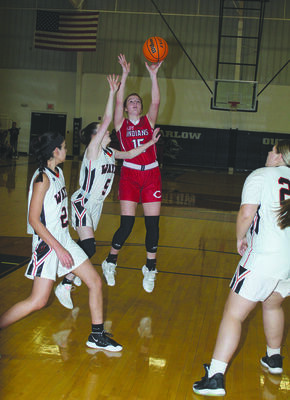 The quest for a record-breaking seventh straight Stephens County Tournament is still alive for the Comanche girls. Monday, the second-seeded Lady Indians pulled away late against a feisty Wayne Lady Bulldogs team for a 62-36 win at Marlow.

There were two lead changes in the first quarter before Comanche closed out the opening frame on a 10-0 run in the final two minutes to reclaim the lead for good.

“Sometimes, it’s hard playing on a day when you don’t have school,” said Megan Robbins head coach. “It’s not the normal part of your routine and you get a little distracted. Today’s game wasn’t awful, but I expect better. They were able to put some pressure on us and we had a lack of focus, but I think we will be locked in and ready to go on Thursday.”

The fast-paced game provided plenty of entertainment for the masked fans in attendance as both teams put on full-court pressure throughout the game.

Comanche built its lead to as much as 17 points in the second quarter before Wayne scored the final four points of the half to cut the lead to 34-21.

The Lady Indians had six three-pointers in the half, including back-to-back treys from Kinley Rendon and Jasmine Francis during the course of the first two quarters.

Wayne cut the lead to 34-24 in the opening two minutes of the third quarter before Francis scored five straight points for the Lady Indians, including her third three-pointer of the game.

After Wayne got the lead down to 45-31 with 2:19 to go in the quarter, Comanche went on a 6-0 run to close out the third with a 51-31 advantage. The momentum continued into the fourth quarter as the Lady Indians scored the first six points to extend their lead to 57-31. Six different Comanche players contributed to the 12-0 run.

Wayne was not able to challenge from that point on as Comanche advanced to the semifinals with a 26-point win.

It was a team effort by Comanche as nine different players contributed in scoring. The team was led by Gracee Miller with 16 points. Miller scored half of her points in the second quarter. It helped push her team into a double-digit lead and kept them there the rest of the way.

The Comanche boys open Tuesday night against Empire. The game recap will be posted online Wednesday at www.comancheok.net.