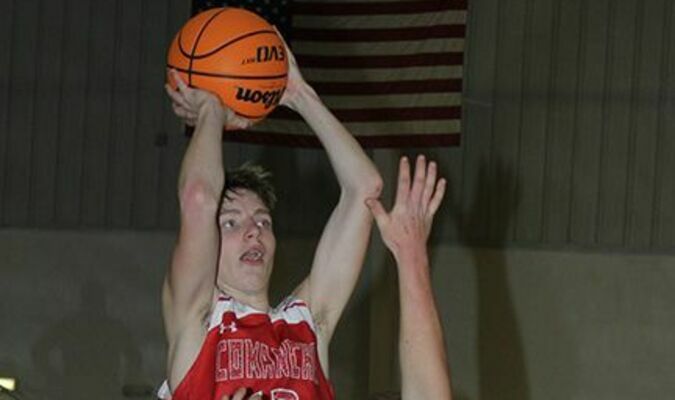 The Comanche Indians advanced to the second round of the 90th annual Stephens County Tournament at Marlow and snapped a nine-game losing streak in the process when they defeated Empire, 56-49, in overtime, Tuesday.

The matchup was easily the closest in the first round of the tournament that featured several lopsided wins.

The game was close throughout with eight lead changes and four ties over the course of regulation and overtime.

"We showed a lot of heart and a lot of character," said Caleb Patterson, head coach. "We've fought hard in a lot of games, but I felt like we fought harder in this game and hung together."

The difference was at the free-throw line down the stretch. In the fourth quarter and overtime, Empire was 8-of-18 from the line, while Comanche was 12-of-18, including 6-of-6 from junior Landon Ellis.

Ellis made both of his free throws with 3.4 seconds left in regulation to tie the game and send it to overtime. He also made both free throws to open the scoring in overtime that gave Comanche the final lead.

"It was good to see (the players making free throws)," Patterson said. "We've had some bumps along the road so far, but the guys got after it and have been spending extra time in the gym shooting and it paid it off."

It was also good to finally snap the losing streak.

"It's good for morale and it's good for team chemistry," Patterson said. "It's tough losing like we have, but we came out and showed a lot of heart and fought like we needed to get the win."

Empire led 9-7 at the end of the first quarter and kept it throughout the second quarter. Jackson Smith and Landon Burton knocked down three-pointers in the final 1:05 to extend the lead to seven points at the half (23-16).
The Indians caught back up in the middle of the third quarter and neither team would lead by more than four points the rest of regulation.

The Bulldogs had the Indians on the brink of a loss when Mcray Weber gave his team a 48-46 lead with just 11 seconds left. Comanche, though, would get the ball downcourt, and call a quick timeout with just under seven seconds left. Out of the timeout, the Indians got the ball to Ellis, who drove the lane and was fouled on his way up that sent him to the line where he made his game-tying shots.

Comanche took the momentum into overtime. Neither team would score until Ellis' free throws at the 1:33 mark gave the Indians a 50-48 lead.

Empire cut the lead to 48-49 with 1:16 to go, but Comanche would close out the final 1:03 by going 6-of-8 at the free-throw line on shots by Ellis, Xander Dodd, Briar Blair and Mason Kulbeth. Blair's free throw with 35 seconds left made the score 53-49 and put the pressure on the Bulldogs by making it a two-possession game.

Comanche will play host Marlow in the semifinals Thursday. The tip-off is 8 p.m. The Lady Indians play earlier in the day at 3 p.m. against Velma-Alma.