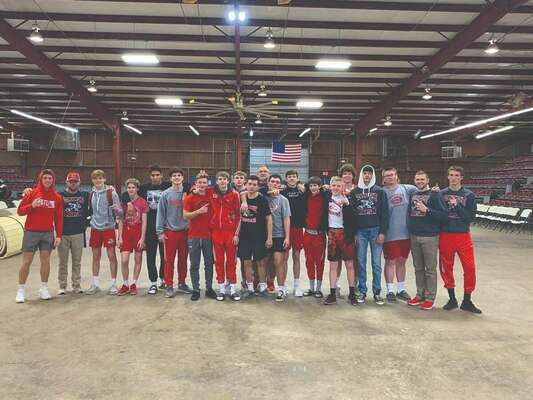 The Indians defeated Plainview, Davis, Lexington and Sulphur on their way to qualifying for the Dual State Tournament, giving them a chance to defend their state championship.

The Indians started the tournament against Plainview, which the Indians won, 57-21. It would be the closest match of the day for the Indians.

Comanche was up 15-9 in the early going before the Indians got three straight falls courtesy of Lake Epperson, Logan Bain and Bryson Evans that quickly put them well ahead.

Only one other team, Sulphur, would win more than one match against Comanche all day. Comanche won that dual by a 62-12 score. They also picked up 71-6 wins over Davis and Lexington.

Comanche coach Casy Rowell was pleased with the way his team wrestled.

“The guys did what we needed to do,” Rowell said “We had Jan. 21 marked off on our calendar as an important date to perform well in order to make it to dual state. The boys showed up and it kind of reassured some of the schedule choices we made this year with all the good competition we’ve seen. We’ve wrestled all the good teams in every class and then going out to wrestle in districts, there was no one doing anything we haven’t seen.”

That was the confidence boost the Indians needed after a brutal schedule.

“It just goes to show that records aren’t really that important,” Rowell said. “If you look at our team and individual records they look pretty bad, but to go out and dominate at districts goes to show it was worth it.”

“Jay and Blackwell are top five teams and we were right there with them,” Rowell said. “We lost some close matches and some matches we were ahead and ended up getting pinned. I got to see where we are at compared to the top teams and we are right there. We need a good performance at the regionals, that’s the main thing.”

The regional tournament will be Feb. 12-13 at Plainview.