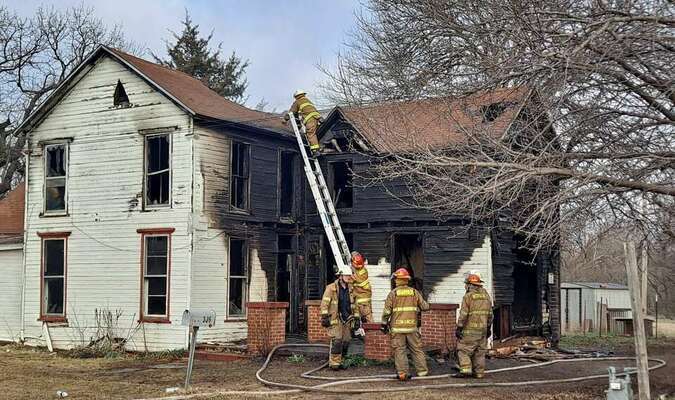 The fire at the home on 309 Church Street resulted in a total loss.

According to police chief Bill Straily, the first of a series of four grass fires started on Dr. Pepper Road west of Highway 81 and continued south and culminated with a structure fire on the 700 block of North Street. The first fire was reported around 5:31 p.m. Tuesday. The home was unoccupied. It was not a total loss but did suffer extensive smoke damage.

Straily said those fires are under investigation for arson and officers have talked to a cooperating adult male suspect about the fire. Straily hopes to have the case wrapped up by the end of next week. The police chief said since the fires are still under investigation, he could not release the name of the suspect or any more information at this time.

In an unrelated incident, a two-story house at 309 Church was totaled destroyed by fire early Wednesday morning.

The department responded to a fire at 5:31 a.m. and fought the fire for four hours.

The fire is believed to have started at the northeast corner of the home, but no official cause had been determined as of the time of the fire report.

No one was inside the home at the time the fire started. Homeowner Tim Bilberry was outside when he spotted the fire and called the department. Jennifer Bilberry is also part-owner of the home.

Straily said the Red Cross and Christian Helping Hands have given the family some aid.