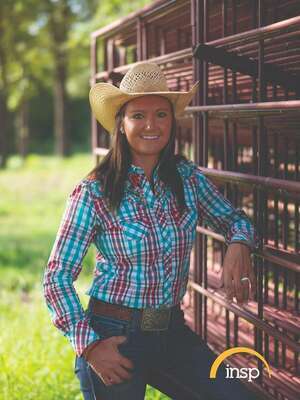 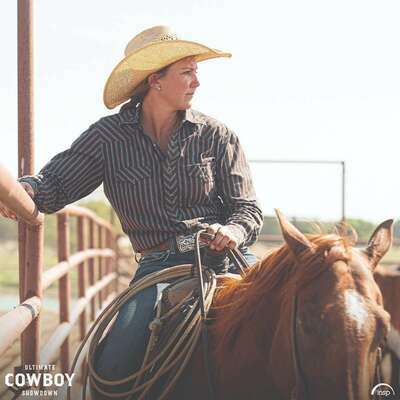 (This is the first of a two-part series on Comanche’s Katey Jo Gordon who is one of 14 people competing on the INSP network’s “Ultimate Cowboy Showdown.” The first episode airs on Feb. 24 at 8 p.m.)

One Comanche resident got a once-in-a-lifetime opportunity and people all across the United States will get to see it unfold before their eyes.

Katey Jo Gordon, a 28-year-old rancher, who lives outside of Comanche with her husband of two years, Dylan Gordon, received the chance to compete on the INSP network’s “Ultimate Cowboy Showdown,” hosted by country music star Trace Adkins.

One day, Katey Jo Gordon received a phone call from a college friend, who happened to work on the first season of “Ultimate Cowboy Showdown.”

“After the first season, they were looking for people to come in for the second season,” Gordon said. “He called me and asked me if I would be interested in this. They wanted to have women who really know what they are doing and had grown up in this. I was like, ‘Yeah, maybe so.’”

He put her in contact with the casting people and she went through the interview process and ended up being selected for the show.

“I kind of took a leap of faith. I was nervous, I had never done anything like that before as far as a competitive ranching situation,” Gordon said. “Once I was selected, I was like, well, there’s no turning back now, let’s go.”

Gordon mostly grew up in Jal, N.M. where she was homeschooled by her mother Jamie Anthony and worked on their ranch with her father, Jay. She credits much of her success to them.

They leased some land outside of Ryan when Katey Jo was in middle school and they sold their ranch in New Mexico and moved to a ranch in Ryan permanently in 2013 when she was 18.

Not only did she grow up on a ranch, but she was a successful rodeo competitor in calf roping. She won over 250 buckles and was on the U.S. Team Roping team and was an American Junior Rodeo champion.

It was a background that helped her tremendously in the competition.

“We had to rope a lot and use our horses during the competition - sorting cattle, roping and things like that,” Gordon said. “Those types of things I was very confident in. Plus, growing up rodeoing and being in a competitive setting like that, you kind of learn to have ice water in your veins. You don’t let your nerves get to you. You can kind of block everything else out and do your job. I think that was a really big help to me because a lot of the contestants maybe haven’t been in that type of setting as far as a roping or competition-type setting with animals. I think that was an advantage for me.”

The 10-episode series was filmed in Texas last July. Gordon was gone from home a little more than three weeks during the filming.

She prepared herself the best she could for the competition. She watched the first season three or four times all the way through. Her father watched with her, pointing things out about what they would be asking her to do and how to do it.

“Some of the stuff they ask you to do is out of the ordinary and you have to think on your feet,” Gordon said. “So being able to watch the first season really helped.”

She admits it was tough being away from home and not really knowing what was going on in the outside world. She got to talk to her husband on the phone some, but after working with him every day on their ranch, it was tough not having him around.

Though being on her own without family around, she was able to learn some things about herself.

“I knew I could always hold my on some things, but I learned if I set my mind on something, it doesn’t matter, I don’t have to rely on someone else, I could do it on my own,” Gordon said. “I just needed to learn to work smarter and not harder and things would work out.”

There were 14 total contestants competing for the Ultimate Cowboy Showdown title. Gordon was one of four from Oklahoma. Other contestants hailed from Texas, Michigan, Missouri, Wyoming, Kansas, Mississippi and South Carolina.

And while some tension does come across the television screen between the contestants on the Survivor-type competition, they all became good friends.
“Honestly, it was great,” Gordon said. “Everyone was so nice and got along so well and we just forged this huge bond because you had to live with those people for 20-something days. Besides the crew, that was the only people you came in contact with. We learned things from each other like how people work their cattle in different ways. It was an awesome experience. Everybody just wanted to help each other. We all stay in contact still, and it was awesome getting to know them.”

The contestants compete as teams in ranch challenges. One cowboy on the losing team goes home. Unlike Survivor, though, where team members vote, host Adkins chooses who goes home.

“We had to make camp and stayed on one piece of property for an extended amount time and you just had to show up and do what they asked you to do every day,” Gordon said. “Day in and day out you had to use your mental toughness to get through it. You did get tired. You did get hot. You got worn down and your horse got worn down, but you just had to persevere and keep going.”

Contestants did get to take their own horses and Gordon chose to take her husband’s 6-year-old gelding “Pedro,” which turned out to be a wise choice as she didn’t feel any of the other horses were a good fit for the competition for one reason or another.

“They were either rope horses or too young to go, so he let me take his horse Pedro and I was super grateful because he made my job a lot easier than it could have been,” Gordon said. “He helped me out a bunch. He got me out of a bind a lot of times.”

According to information provided by INSP, “the last cowboy standing will walk away with a prize package that includes a herd they can take to market, a Rawhide Portable Corral, an Arrowquip Q-Catch 87 Series Cattle Chute, the coveted ‘Ultimate Cowboy Showdown,’ belt-buckle, and a lifetime of bragging rights.”

The prizes and the experience made it well worth the time on the show.

“The prizes that you get at the end, the $50,000 worth of cattle and things like that, that is life-changing in the agricultural industry because it is so difficult to get into it as a young couple,” Gordon said. “My husband and I just can’t walk into a bank and go hey, I want to buy an ‘x’ amount of cows and they be like, ‘Ok, here’s the money.’

“To get the opportunity to go and compete for something like that is life-changing because that could set you up for a very substantial future, not only for us, but our family down the road. I was just super grateful to have the opportunity, not to mention the experience of being able to put on my resume and to meet and have contacts all over the United States now. It made it well worth it in the end.”

The season two premiere of “Ultimate Cowboy Showdown,” with Katey Jo Gordon will air Wednesday, Feb. 24 at 8 p.m. on the INSP network. INSP is available in the Comanche area on Sparklight (82), Direct TV (364), Dish Network (259) and Pioneer Long Distance (110). It is also available on online streaming services Vidgo, SelectTV, FrndlyTV and Philo.

Gordon has set up a public Facebook page under Katey Jo Gordon to talk about the show and other things.