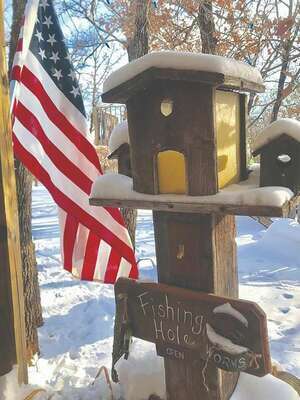 Old Man Winter made an appearance and he was furious.

Forecasters had been predicting masses amount of snow in the area and while some on social media may have scoffed at the predictions after a small amount fell on Sunday morning, no one was laughing less than 24 hours later with several inches of snow on the ground, homes with frozen water pipes and people concerned about their pets and livestock in sub-zero temperatures just to name a few things.

In a social media post, Comanche city manager put out a call for people and businesses to conserve power.

“Turn off any non-essential lights and appliances. There is currently a shortage of electricity due to no renewables (wind, solar or hydro),” Ralls said in the post. “The gas plants used to generate electricity are competing with people using gas to heat their homes. We need to do our part to conserve or risk a mandatory outage.”

On Tuesday morning, Ralls said he was waiting for a possible call about when Comanche may be called upon for the mandatory outage.

The Southwest Power Pool sent out a press release asking for people to make sacrifices wherever they could such as:

Postpone using major electric appliances such as stoves, dishwashers, and clothes dryers until the demand for electricity decreases

Turn off electric lights and appliances that you do not need or are not using, and

More snow was predicted for Tuesday afternoon and Wednesday morning.

According to The Weather Channel website, temperatures in the 40s are expected over the weekend with highs in the 50s early next week in Comanche.

Some area residents are trying to make the best of the situation they can.

“Stuck inside means cleaning up the clutter and remodeling the kids' bedrooms,” said Sarah West in a response to a question on the Comanche Times’ Facebook page.

Donna Burton is using a little ingenuity to take a practical approach.

“(I’m) melting snow with my Instapot , so we can flush the toilet,” she said.