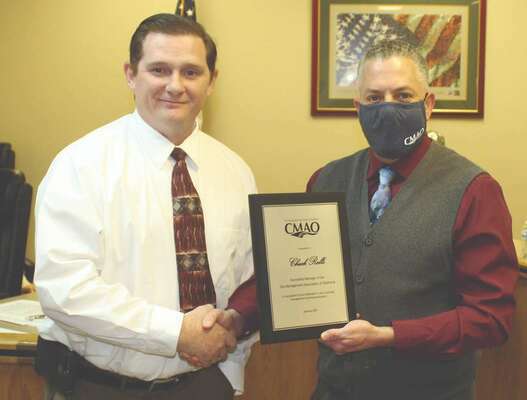 Dave Slezickey (right), president of City Managers Association of Oklahoma (CMAO) presents a plaque to city manager Chuck Ralls in recognition of Ralls completing the course work to become an accredited manager of the CMAO. The presentation was made at the city council meeting last Tuesday. Slezickey praised Ralls’ work in the program.

The Comanche City Council approved a couple of agenda items with the purpose of beautifying downtown and adding some more businesses at its Tuesday meeting last week. They were two of the four grant applications approved in the meeting.

The council approved the addition of new street lights for Main Street that would be added when the work on the new sidewalks is scheduled to begin in March.

The city had received a $3,000 grant from Keep Oklahoma Beautiful that would have paid for power coating the existing street lights, but instead, they opted to use the funds to go toward all new street lights at a cost of $10,560. The old street lights would be used in plans for a new driving range at the golf course. With a charge for using the driving range, the city would eventually make back the money back spent on the new downtown poles.

In another agenda item, the council approved the city manager and ASCOG to apply for a 2021 rural development grant that would help pay for a possible shopping area.

The city has purchased a burned out home and the house on the property adjacent to it on the 300 block of Church St. It is the same type of grant that paid for the restoration for the old motel and gas station on Highway 81.

Ralls said if they do receive the grant, they plan to build a 7,000-square foot building housing one to four units for businesses. He emphasized that the city is just applying for the grant at this point.

The council also authorized the city manager to apply for a USDA community services grant and matching funds, if needed to fund the payment.

That grant would be for a $68,000 project that includes an indoor floating pavilion, ADA-compliant restrooms, sidewalks and upgrades at Comanche Lake. The grant would cover $50,000 and the city would be responsible for $18,000 in matching funds.

The fourth grant approved was an AFG safety equipment and operations grant through FEMA in the amount of $190,978 with the city’s match being $9,094.19 that would be paid for by the rural fire department fund.

It is the third time for the city to apply for the grant.

“We keep applying for it hoping one day we will get it,” Ralls said.

One agenda item the council did not approve was a recommendation by a member of the planning and zoning commission to revise the ordinance on mobile homes and a new ordinance for mini/tiny homes.

The commissioner felt the current approval process, requiring 80% approval of the property owners within a 500-foot radius of the proposed site for the homes, was too encumbering and discriminatory.

The council disagreed, however, and took no action to approve a new ordinance.

Ralls announced that the city did not receive a REAP street grant it had applied for.

“We missed it by three points,” Ralls said.

The city will apply again. In the meantime, the city will continue patching potholes and maintaining the roads the best they can.

Ralls also recognized Thompson’s Pharmacy, Delbert’s and 3B for making monetary donations to purchase the cartridges for the police department’s new TASER guns.