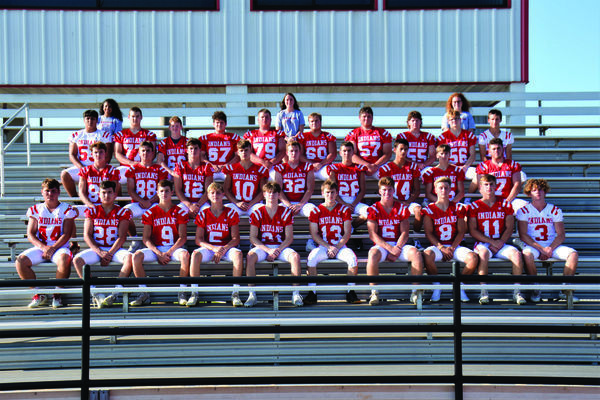 The 2020 Comanche Indians football team will be looking to make even more noise this year after making it to the playoffs in 2019. (Photo by Jason Hodges)

Fresh off a trip to the state playoffs and a winning season in 2019, the Comanche Indians are not content to repeat the performance.

The offense will be lead by sophomore quarterback Kooper Doucet (6-0, 170), who took over the quarterback duties after Bryson Evans, the starter in game one, was injured. Doucet took over and finished out the season.

“Every week he gets better,” Rowell said. “He’s a good student of the game and has leadership skills. Is he perfect? No, but he works hard and he’s a gamer.”

Evans (5-9, 166), a junior, is back and will play a hybrid back where he will line up some in the backfield and some in a receiver slot.

“Bryson is passionate about playing quarterback, but he knows what is best for the team is for him to play somewhere else,” Rowell said. “The number one thing with him is to find ways to get him out in open space and sometimes you can’t do that as a quarterback. He’s a great team player and wants the team to win.”

Evans has taken a liking to his new position. In the exhibition game against Mangum, he caught four touchdown passes from Doucet.

When Doucet is not throwing to Evans, the Indians have a big playmaker in junior Mason Kulbeth (5-9, 143).

“They are different types of receivers,” Rowell said. “Bryson is a Wes Welker-type of receiver whereas Mason can go up and get the ball and make the big play.”

Sophomore Logan Bain (5-9, 140) will get the nod at another starting receiver slot.

“We’ve got some guys who maybe aren’t at the level as Bryson and Mason, but they are very good receivers and I expect a lot out of them,” Rowell said.
Bain also has proven to be a solid back-up quarterback in the two exhibition games.

“It’s awesome (to have that size),” Rowell said. “One of the moms, Christy White, feeds them once a week and definitely takes care of them. We lift weights seventh hour and when you combine that with teenagers going through puberty, we’re getting some pretty big guys.”

Allie and Epperson are quick, while Martin, the strongest overall player on the team, is the bruiser for when the Indians need a tough yard.

“Gage has looked awesome in the scrimmages,” Rowell said. “Lake is a starter on defense, so we want to try to limit him as much as we can on offense, but we’re going to rotate those three guys.”

There is no set tight end. Rowell said the strengths of his team lies in the players who are receiver/backs and not receiver/blockers.

“He’s a huge asset for us there,” Rowell said.

Senior Reese Middick (6-5, 354), who played offense last year, will play on the defensive line this year.

“He’s going to be a handful for a lot of teams, they’re going to have to double-team him,” Rowell said.

Martin and senior Hunter Beck (5-7, 170) will handle the defensive end positions. Coalton West is expected to see time there as well.

Comanche lost its entire inside linebacker corps, but Rowell is confident he has players that can fill the roles.

“We have the right guys, it’s just a tough position to play,” Rowell said. “You have to be able to read the run and be fearless.”

Epperson will be at one outside linebacker spot with senior Kanyn Allen (5-7, 143) at the other.
Rowell said Epperson was a real leader on defense and they were both excellent tacklers.

Junior Devon McCarty (6-1, 157) returns at safety and Rowell says he uses his size to his advantage.

Rowell said he is still searching for a kicker after the departure of Aaron Barnard last season. Barnard was an all-district selection and was a big part of some wins for the Indians last season.

“We’re still looking,” Rowell said. “We’ve got it narrowed down to two guys, I think, but I know there is someone out there walking the halls who can kick a football through goal posts. That’s how we got Aaron.”

The Indians open this Friday at home against Dickson at 7:30 p.m.

There will be a pre-game fundraiser meal benefitting the CHS Speech, Drama and Debate Club beginning at 6 p.m. Menu includes chicken tenders, mashed potatoes, mac-n-cheese, green beans, rolls and dessert for $10 a person.

Indians fight back to win opener against Dickso...