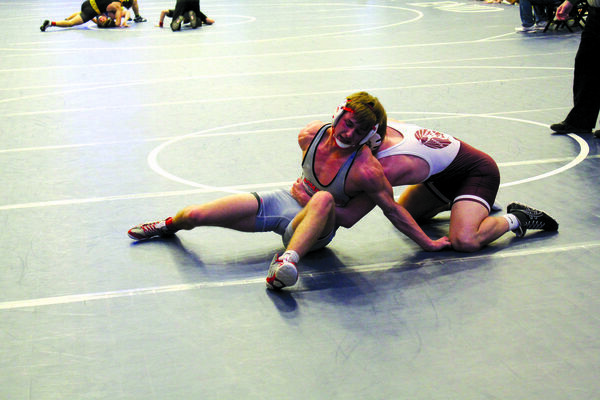 The Comanche wrestling team fell to Blackwell, 36-35, in the quarterfinals of the Class 3A Dual State Tournament at the Stride Center in Enid last Saturday, ending hopes of back-to-back Dual State Championships.

The Indians found themselves in a hole in the early going against Blackwell and despite a valiant effort, were never able to catch up to the Maroon, falling by a 36-35 score.

Comanche was down 27-0 to open the match, losing four head-to-head matches and forfeiting another. Jaxson Billingsley, Tristan Frye and Jacob Billingsley all lost by fall and Gunnor Yates lost a close decision by a 6-5 score.

Senior Lake Epperson then got Comanche on the board at 138 pounds with a 4-1 decision to make the score, 27-3. The match was tied 1-1 after two periods when Epperson scored three points in the third to get the win.

Tucker Oliver followed with a win by fall in the first period to get the lead down to 27-9.

Noah Presgrove fought hard through two periods at 152 pounds before losing by a pin, which pushed the Blackwell lead to 33-9.

Gage Allie then dropped an 11-5 decision as Blackwell went up by 19 points.

Kooper Doucet received a forfeit at 182 pounds, getting the Indians within 36-20 with three matches to go and still mathematically in the match. Unfortunately for Comanche, Kasen VanBuskirk’s 6-4 win by decision at 195 pounds would not produce enough team points to keep the Indians within reach of the Maroon. Up by 13 points, Blackwell forfeited the final two matches to Owen Bigford and Cade White and claimed a 36-35 win.