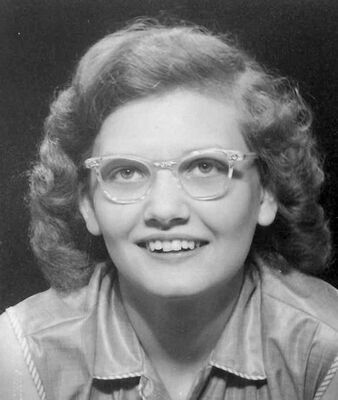 Zelpha Myrle (McAlister) Taylor passed away on Wednesday, March 17, 2021. She was born Sept. 11, 1936 to Harold Daniel and Rella Rebecca (Pierce) McAlister in Enid.

Zelpha was the oldest of three children born to Harold and Rella. Her brothers are Gerald (Bud), who preceded her in death, and Roger and his wife Alline who reside in Comanche.

Zelpha started school in Duncan, attended Oak College, and graduated high school from Comanche in 1954. She met Harold Don Taylor while attending high school in Comanche and they were married July 2, 1955. They had three children Mark Steven, Donna Zel, and Karen Sue.

Zelpha started college after her three children were born. She received a Bachelor of Science in Liberal Arts from the Oklahoma College of Liberal Arts in Chickasha. She continued her education and received a Masters Degree in Education from Southwestern Oklahoma State University in 1977. She loved learning and went on to achieve specialties in reading, Psychometry, Special Education, and Counseling. Zelpha’s teaching career spanned 29 years. She taught at or was a counselor at Comanche, Oney, Carnegie, and Walters Public Schools. Even after retirement she volunteered at Comanche Public Schools.
An accomplished seamstress, she sewed many clothing items for her family. After she retired, she began making quilts. Her talents were prolific and she made multiple quilts for her son, daughters, grandsons, and granddaughters. She was a member of the Oklahoma Homemakers College Extension and the Oklahoma Quilters Guild. During retirement, Zelpha and Harold Don became active members of the Duncan Antique Car Club. They could regularly be seen cruising Stephens County in their ‘55 Chevy Bel Air.

Zelpha was baptized into the Church of Christ in Nocona, Texas, in 1961 and was a member of the Church of Christ. She is survived by Harold Don, her husband of 65 years. By her children: Mark Taylor and wife Vickie of Carnegie, Donna Taylor of Edmond and Karen McCullough and husband Tom of Apache. She is also survived by five grandchildren: Steven Taylor and Scott Taylor of Carnegie, Morgan McCullough-Landolina and husband Justin of Williamsburg, Virginia, and Sydney McCullough and Andie McCullough of Apache.
Services were Monday, March 22, 2021 at the Whitt Funeral Home in Duncan.

In lieu of flowers the family would appreciate donations to the Churches of Christ Disaster Relief Effort Inc., PO Box 111180, Nashville, TN 37222, www.disasterreliefeffort.org.
Online condolences can be made to the family at www.whittfh.com.