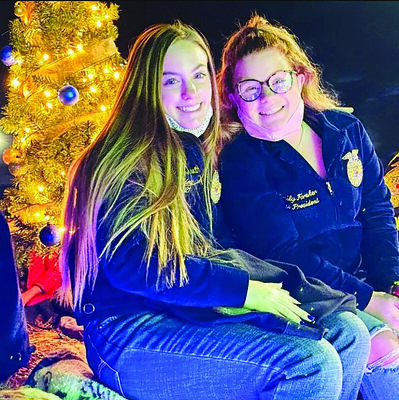 When Madison Lindesmith saw her friend Emily Foraker’s sheep when they were in eighth grade, Lindesmith knew she had to get involved in a program that has been a big part of their lives the past few years.

“I have a compassion for animals and when I went over to her house and visited her lambs and everything, I was like, ‘Yeah, I got to have one,’” said Lindesmith. “I then joined my freshman year.”

Both started out their FFA career by showing lambs before moving on to other animals.

Foraker has alternated between sheep and pigs while Lindesmith went from sheep to heifers the past couple of years.

“My favorite is pigs,” Foraker said. “They are easier to work with.”

Lindesmith found the same thing with heifers, plus the fact she tended to get attached to her sheep.

“I started thinking of them as more like pets than show sheep or market lambs,” Lindesmith said.

Both have held various Comanche FFA offices for three years. This year, they are the leaders of the school’s FFA program with Lindesmith as the president and Foraker as the vice president. It is the second year as vice president for Foraker, who has also been sentinel. Lindesmith has held the sentinel and secretary positions.

And while it took a lot of commitment on their part to persevere to obtain their degrees, they both recognize they could not have done it on their own and give credit to their instructors. When Lindesmith and Foraker became involved in FFA, the instructor was Jacey Fye, who helped and encouraged the girls to get started down the path of obtaining their degrees. Current advisor Shelbi Morgan has helped keep the girls on track.

“When we first started this, I was very involved and (Fye) wanted you to be as involved as you could be and Mrs. Morgan does as well,” Foraker said. “They had a mindset that we were going to get our state degrees and believed that we could do it.”

And while the showing of animals takes a lot of time and hard work, it did not seem to be the hardest part of the process for Lindesmith.

“Scrapbook is probably the hardest part,” Lindesmith said. “You have to think about every single thing that you have done.”

And all the work that has culminated with the honor is not lost on the seniors.

“It makes it look really good on a resume and I think it looks good in general just walking across the stage to get it in front of our family and friends,” Lindesmith said.

“To me, it is like a wrap-up, like a finish to our show season,” Foraker added. “And, we get rewarded for all the work and hours we put in.”

Foraker, the daughter of Josh and Micah Foraker, plans to eventually go to nursing school after getting her applied science degree at the University of Oklahoma.

Lindesmith, the daughter of Greg and Roxana Lindesmith, is being flexible. She plans to stay close to home to get her basic college courses and then possibly going into Applied Behavioral Analysis (ABA) therapy but she is keeping her options open.

Until then they will continue to serve as officers and look back on some of the things they took away from being in the program.

“I would say speaking abilities,” Lindesmith said. “I remember in eighth grade Miss Fye saying she will get us a blue jacket if we could do the creed so I faced the wall and I said it. Now, I like to go and compete in speaking. I’m not afraid to really talk in front of people anymore, even big crowds. Nothing really bothers me.”

Foraker will look back on her time with the animals.

“They taught me if I’m going to do it, it needs to be 100 percent,” Foraker said. “It taught me time management and how to work. If you want something, you go work for it.”

Band ready to get back on field