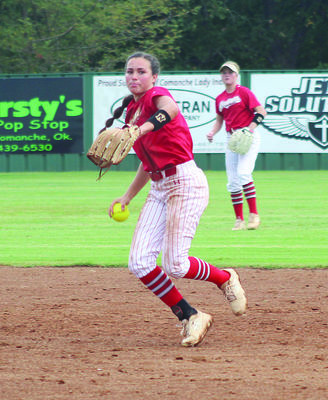 Comanche shortstop Gracee Miller loads up to throw out a runner at first base in the Lady Indians’ 10-4 win over Marlow on Monday.

Less than two weeks ago, the Comanche (10-5) and Marlow softball teams played a low-scoring game that was not decided until late.

Comanche led 9-1 when Marlow scored three runs to cut the lead to 9-4, but it would be as close as the Lady Outlaws would get. Comanche pitcher Kinley Rendon and the defense shut them down.

In the bottom of the first, Raylee Chaney singled and would later score on an error. Brighton O’Connor scored the second run on the game when she scored on a sacrifice fly by Brooklyn Gill.

That would do it for scoring for Comanche until the bottom of the fourth inning when Brown picked up her third RBI of the game.

With one out in the top of the seventh, the game was called because of lightning.

Chaney, Gill and Brown all had two hits to lead Comanche at the plate. Rendon, O’Connor, Gracee Miller and Aspen Loafman had one hit each.

Rendon picked up the win on the mound, allowing four runs on seven hits in 6 1/3 innings. She struck out one and walked one.

Comanche improved to 3-1 in district play to stay in third place. They were scheduled to play district-leading Dickson on Tuesday, but were rained out.

Lone Grove scored at least one run in the first three innings to build a 6-0 lead and the Lady Indians were never able to answer.

The Lady Indians’ lone run came in the bottom of the third when Raylee Chaney drove in Mykayla Slovak. Chaney and Brooklyn Gill had the only hits in the game.

Gill took the loss on the mound, surrendering five earned runs on nine hits in four innings of work. She walked three and struck out three.

The game was highlighted by the first home run of the season for Comanche when Lily Brown went deep over the center field fence to lead off the third inning.

The Lady Indians had already taken a big lead with five runs in the first inning. Then after Davis cut it to 5-1 in the top of the third, Comanche put the game away with three runs in the bottom half of the inning, including Brown’s home run.

Raylee Chaney had the only multi-hit game as she went 2-for-2. Brown, Kinley Rendon and Aspen Loafman recorded hits.

Rendon was the winning pitcher, giving up no earned runs on three hits in five innings of work. She struck out five and walked one.