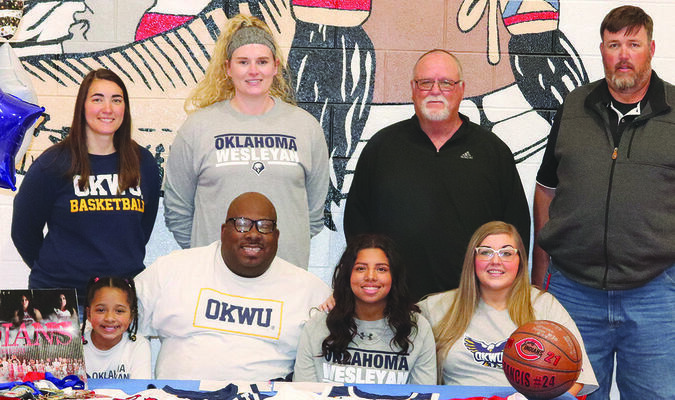 Jasmine Francis fulfilled a dream last week, signing a letter of intent to play basketball at Oklahoma Wesleyan in Bartlesville.

“It’s a day I’ve been looking forward to for quite a long time,” said Francis. “I’ve been working really hard to accomplish playing at the next level and now I’m here and I thank everyone who came along and helped me in this journey.”

Francis said she liked the people there and she was treated like family. She went to a tryout camp where she was offered the scholarship.

“I had been out of basketball for two weeks when I went up there and I was really out of shape, but I shot the ball pretty well and I had something they liked.”

Comanche head coach Megan Robbins only had Francis for one year, but Francis made an impression on her coach from the start.

“Jasmine’s funny, she’s probably the first kid that got on the phone hunting down my phone number when I got the job,” said Robbins. “She loves, loves the game of basketball. I’m excited for her to get to follow her dreams and play at the next level.”

Francis was named to the all-conference team this year and was named an FCA All-State. During her senior year, she averaged 6.8 points, 1.8 rebounds, 1.1 assists and 1.2 steals per game.