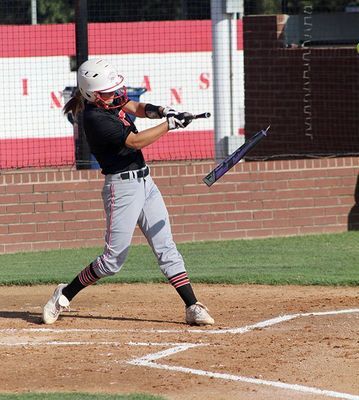 Kinley Rendon breaks her bat after hitting a ball in the Lady Indians' 11-1 win over Lindsay on Monday. (Photo by Todd Brooks)

The Comanche Lady Indians moved one step closer to first place in District 3A-4 with an 11-1 win over Lindsay on Thursday.

They play district-leading Dickson (8-4 overall, 5-0 district) at home today at 4:30 p.m. A win would tie the teams in the district and give the Lady Indians (11-5, 4-1) the advantage in head-to-head competition. Seniors will be honored after the game.

Comanche took control of the game with Lindsay early, batting around in the line-up and posting a 7-0 lead in the bottom of the first inning. A combination of hits and fielding errors by the Leopardettes led to the big lead.

Brooklyn Gill, Kinley Rendon and McKayla Slovak all picked up an RBI in the inning.

The Comanche bats would cool down and the Lindsay defense would shore up for the next few innings. Lindsay drove in a run in the top of the third for the Leopardettes only score of the game.

The Lady Indians got the run back in the bottom of the fourth when Gracee Miller tripled home Brighton O'Connor, who had earlier doubled.

Comanche put the game away in the bottom of the fifth with three runs to win by run-rule.

O'Connor drew a bases-loaded walk to bring in the first run of the inning. Gill drove in the second run on a ground ball out and the game ended when pinch-runner Kenley Lemons scored on a wild pitch.

Eight different Comanche players had a hit in the game, led by Raylee Chaney, who went 4-for-4 and scored twice. Rendon, O'Connor, Gill, Miller, Lily Brown, Slovak and Teagan Pineda all had a hit.