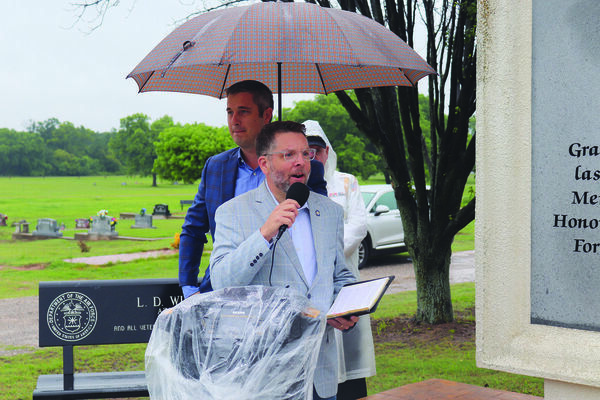 A light rain fell at Fairlawn Cemetery in Comanche during the Memorial Day Service, but the few that braved the elements did not seem to mind.

“Some people might say what we are doing out here is a sacrifice, but in the overall context, we know where the real sacrifice is, and that’s why we’re here,” said Marcus McEntire, State Representative from District 50. “It’s a day to to come together and solemnly contemplate the costs paid for our freedoms and lives of those who sacrifice them willingly.”

McEntire was joined by State Sen. Chris Kidd as a guest speaker. The program was led by Dan Mitchell of the Stephens County Honor Guard. David Galletly, pastor at All Saints Church in Duncan opened and closed the ceremony with prayer.

“Today is not a day of mourning,” McEntire said. “General Patton said it best, ‘It’s foolish and wrong to mourn the man who died, rather we should thank God that such men lived.’ So the challenge for us today is to not merely remember, but to remember with gratitude and, dare I say, that we should remember also, with pride.”

McEntire said a problem we have is everyone gets so caught up in their own lives and families, they can forget about those who made the ultimate sacrifice.

“We need a day like this to make us stop and think how we got here,” McEntire said. “So, we really need a day like today, the day to remember those who fought and sacrificed their futures so we could enjoy our present.”

Kidd acknowledged that those in attendance showed that they cared and that they didn’t forget. He gave the numbers on the statistics of those from Oklahoma who served in various wars.

“We have more military personnel per capita than any other state,” Kidd said. “And I think that is something to be proud of. They went to places they couldn’t even pronounce like Da Nang, Karbala and Kandahar.”

Kidd said the United States has always been a force for peace.

“Many years ago, President Calvin Coolidge said the nation which forgets its defenders will itself be forgotten,” Kidd said. “So let us never forget those who gave their lives for our freedom in this country.”

During the ceremony, the Stephens County Honor Guard did a gun salute and also played Taps.