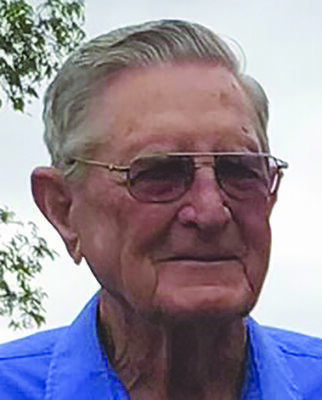 Kenneth Simmons departed this world to be with his Lord and Savior to live in peace, on Thursday, May 27, 2021 while surrounded by his family at his home east of Comanche.

A funeral service was held on May 29 at Countryside Baptist Church, with Kirby Kelly officiating, assisted by Gary Ledford.  Burial followed at Fairlawn Cemetery, under the direction of Comanche Funeral Home.

Kenneth was born on October 4, 1923 to John Douglas Simmons and Flossie Faye (Allen) Simmons. He graduated from Comanche High School in 1942. He married Grace Hilderbrand, his high school sweetheart, on June 15, 1942. They were married for over 67 years.

Kenneth served in World War II as a Navy Seabee. He worked at Sun Oil Company for 27 years.  He was a rancher and farmer all his life. Kenneth was an active member of Countryside Baptist Church.

After his retirement Kenneth enjoyed farming, gardening, hunting, and fishing. He especially loved playing cards and dominoes with family and good friends.

Kenneth was preceded in death by his wife Grace; his parents, John and Flossie Simmons; sister, Helen Keeler; and grandson, Doug Simmons.

Special thank you to Andrea, his home health nurse, and Jessica, of Kindful Hospice.