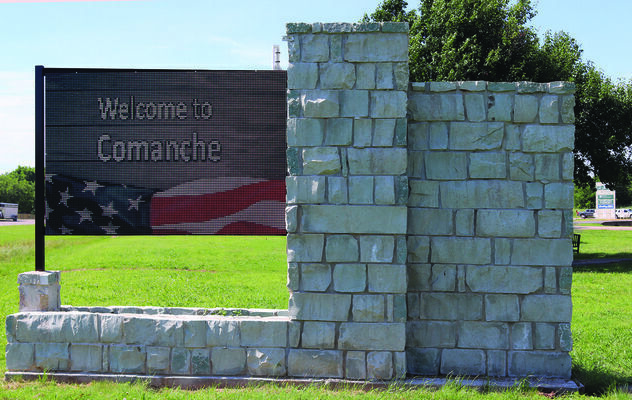 (Editor's note: Since this story was first published in the newspape, there have been changes to the start date of the planned sidewalk project. The company, Schiralli Construction Corp, of Wilson, asked and received an extension from the city to begin the project on Aug. 1. More information on the change will be provided in a forthcoming Comanche City Council story. The original story that was published in this week's newspaper has been updated in this digital story.)

People coming into Comanche from the north on Highway 81 may have something catch their eye.

The city’s digital sign welcoming visitors to the city and a place for advertising dedicated two years ago in the memory of Steve Bolton, is up and running again and city officials are hoping it stays up and running this time.

City manager Chuck Ralls had stated recently that there was a lot of finger-pointing going on as to who was responsible to get the sign up and running again after months of non-operation. It did not help matters that the company that installed the sign is based in Canada.

Ralls said he was told by the company that the city would have to pay for any repairs because it was never covered by the 10-year warranty.

Not satisfied with the response he was being given from company representatives, Ralls stayed persistent until he was able to talk with the company’s president.

The company agreed to send the new control box.

“When we put it in the sign fired right up,” Ralls said.
He said the city was going to bill the company for the IT services paid for by the city that was required to finally get the sign working again.

Last week, the Oklahoma Department of Transportation issued a news release that work on the downtown sidewalks in Comanche was slated to begin on Monday.

Ralls said he held a Zoom meeting with the contractors last week and they said they were not going to be able to start on Monday. The work is now planned to begin on Aug. 1 due to weather conditions preventing the company from completing earlier projects.

“They have 120 days to complete the project and the clock started on Monday,” Ralls said.

The contract states that if the project is not completed after 120 days the contractor has to start paying the city.

The contract is worth $992,000 and is paid for with a combination of federal and local funds.