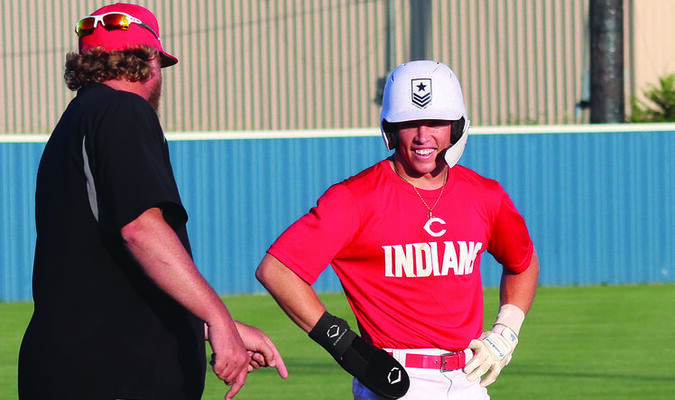 The Comanche baseball team is getting the chance to get used to their new coach and he is getting a chance to know them.

“Yeah, I’m still having trouble with getting the names down,” said Jarod King with a laugh. “When I don’t know a name, I make one up.”

The coach came from Frederick where he had multiple district and regional titles and made three state playoff appearances.

Last week at a tournament in Marlow, Comanche went 2-0 in pool play with wins over the Shockers and Chickasha and qualified to play in the winner’s tournament on Saturday where they went 0-2.

“We had three or four starters out,” King said of the Saturday games. “Guys were playing in other tournaments and we had one with a sore arm. Washington beat us 5-1, but it was a good weekend. We got to play a lot of baseball.”

Monday night was the home opener for the summer league as the Indians hosted Walters. They swept the Blue Devils in a doubleheader.

“It’s going good,” King said. “The attitudes are good and everybody wants to be here and they’re doing what they’re asked and they play hard.”

During his short time working with the team, he has seen the abilities of his players.

“We’ve got quite a bit of ability and then the part we are lacking in a little is kind of the baseball savvy part of it,” King said. “We’ve got some athletic kids and some strong kids, they just don’t know as much about baseball as I am used to. So in certain situations they don’t know or remember what to do. Once we get the baseball aspect then we’ll be pretty good because we have the talent.”

King said he will hold the team to high expectations even though they might have had a rough year this past season where their coach resigned during the season and they struggled at times to get wins.

“I wasn’t coach here last year, so whatever happened, I wasn’t a part of that,” King said. “My expectations are to be a team that wins a district and goes and plays in a regional. And I think we have the guys to do it.”