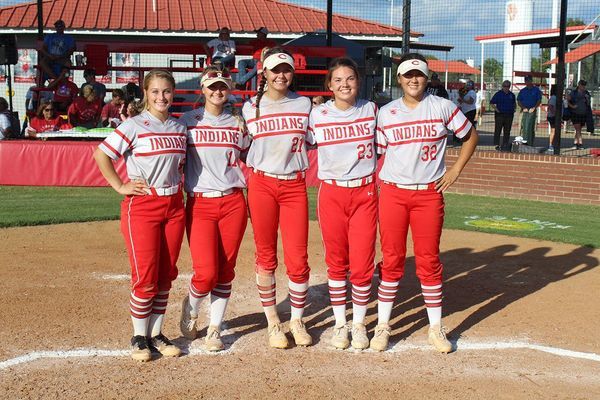 With just over the halfway point of the district race completed, the Comanche softball team found itself in first place heading into a pair of big games Tuesday and today (Thursday).

The Lady Indians (12-5 overall, 5-1 3A District 4) took over first with a 2-0 win over visiting Dickson (8-5, 5-1) last Friday afternoon. Dickson came into the game without a loss in district play. Comanche's win put the teams in a tie with the Lady Indians holding the head-to-head tiebreaker.

It was a hard-fought win for Comanche who pushed across both runs in the bottom of the fourth.

"I knew it was going to be a really tough game, so with all that, I thought we played well, especially on the defensive side," said Aaron Minor, head coach. "It was kind of expected and the way we've been playing lately."

In the fourth inning, Brighton O'Connor had a lead-off double. Brooklyn Gill walked and Gracee Miller picked up a bunt single to load the bases with no outs. Lily Brown hit a sacrifice fly to center field to score O'Connor and Caity Blair followed with a groundout that brought in Miller.

That would be it for the scoring for the rest of the game, but the Lady Indians did get the big hits when they needed them to get the lead.

"The more at-bats we see, the better we are hitting," Minor said. "(Dickson) played well. I thought we would score more runs than that. They did a good job keeping us off-balance, but we battled hard and did what we needed to do."

Dickson put the pressure on in the sixth inning. A two-out error by Comanche put potential game-tying runs at second and third base, but Rendon got through the inning unscathed when the next batter flied out to right field.

Comanche had eight hits in the game. led by Raylee Chaney, who was 2-of-3. O'Connor, Gill, Miller, Brown, Blair and Mykayla Slovak all had one hit each.

Rendon gave up six hits with no earned runs. She struck out four and walked one.

Old hotel is getting new look