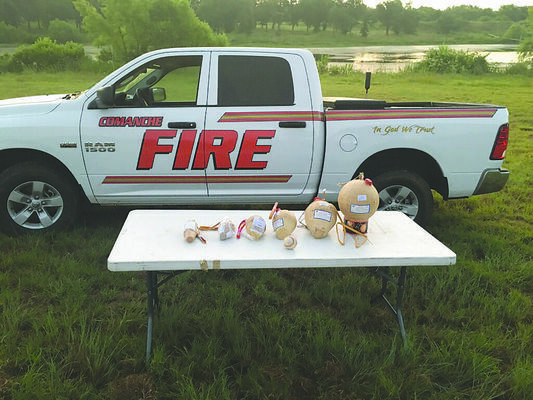 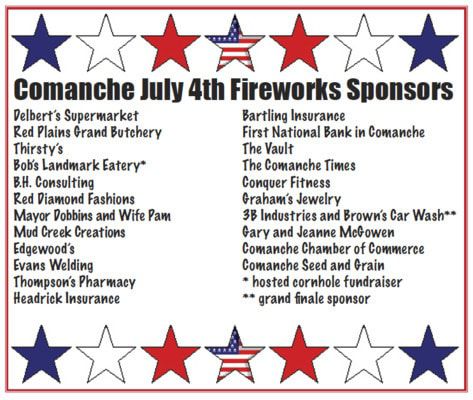 The Comanche night sky will be lit up like, well, the 4th of July, this Sunday thanks to some area businesses and citizens that did not want the city’s annual fireworks tradition to not take place in 2021.

A couple of months ago, the city council decided it would not be the wisest use of city taxpayer’s money after a year of lost revenue due to COVID-19 to have the show that carried more than an $8,000 price tag.

That decision was not a popular one with some residents who wanted to see a fireworks show. Business owner Trey Clinkenbeard decided to do something about it.

“I grew up in Comanche and I remember going to that since I was little,” Clinkenbeard said. “It was a special thing in my heart to go see the fireworks.”

Clinkenbeard, though, said he understood why the council made the hard decision not to have it.

“With money as tight as it was, I thought they made the right decision,” Clinkenbeard said. “I want my city officials to be a little tighter with the taxpayers’ wallet because that’s the way I am with my own money.”

Undeterred, Clinkenbeard went and did some research on how Marlow and Duncan financed their annual fireworks shows.

“What I found out was the cities don’t pay for them, they get sponsors and donations,” Clinkenbeard said. “I thought if Marlow could do it then we could, too. It stirred the rival in me.”

So, Clinkenbeard took to the streets and the telephone to drum up support. In a matter of a few weeks, he had raised $10,500.

“I was blown away,” Clinkenbeard said. “To think businesses and people stepping up and giving that amount of money after the year we’ve been through, it was just an extra amount of generosity on their part.”

City officials were grateful that the community was able to keep the show going.

“On behalf of the City I am very thankful for a community that is able to step up and keep the tradition alive,” Chuck Ralls, city manager, said. “The year of COVID has been very difficult on the City budget. We did everything possible to make this work. I am especially appreciative of Trey Clinkenbeard and his passion in rallying the community for this celebration. We have a dedicated fund now established for the city, businesses and individuals to contribute to throughout the year so we are able to continue for many years to come.”

There should be a good turnout for the event. Both Marlow and Duncan are holding their celebrations on Saturday, which leaves Comanche by itself on Sunday.