Youngs leave PABC, Comanche to serve in ministry in Missouri 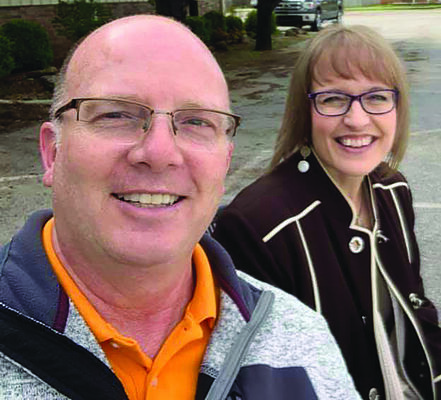 Comanche was an answered prayer for Trent and Dana Young.

Thirteen years ago while serving a church in Colorado the couple had been praying to God for an opportunity to be closer to family. Dana’s family was in the Oklahoma panhandle and Trent’s was in eastern Texas.

That prayer was answered when Patterson Avenue Baptist Church called Trent to be their pastor 13 years ago. Now, the couple is off on another adventure to serve God.

The Youngs had their final service at Patterson Avenue Baptist Church earlier this month. Then it was a whirlwind of getting ready for their daughter, Jacque’s, wedding in Arizona to Erik Hatfield and getting ready to move to Missouri where Trent has accepted a job with the Gasconade Valley Baptist Association.

“I will be basically pastoring pastors,” Young said.

It was something that he and Dana felt led to do the past few years. Pastors are used to counseling others, but there may not be an outlet for them to receive counseling.

He and Dana had been meeting with other pastors and their wives throughout Stephens County to offer them counseling and encouragement.

“We really developed a heart for doing it and the desire to do it kept growing,” Trent said. “God opened this door for us to do that full time.”

He has fond memories of his time in Comanche.

The couple not only was determined to make an impact at their church but outside of it as well.

“I really believe in ministry there is a need to be involved in the community,” Trent said. “We get involved in a lot of stuff like the Chamber of Commerce, being on the board of the Charis Pregnancy Center and we helped get Christian Helping Hands going, which is so important to the town.”

Trent said they have taken a part of Comanche with them to Missouri.

“We made such good friends and we enjoyed our time so much there,” he said. “Hopefully, we have helped the church take a step forward from when we got there.”

They may have moved, but they will be back to see their son Zach who lives in Duncan with his wife Sydni and son Jaxon. They are also expecting a second child, Josiah soon.

“The last month was so crazy,” Trent said. “On one weekend we had the wedding in Phoenix and the next weekend we moved to Missouri. We had so much stuff to pack and there’s still so much going on. God made things come together and God took us through it.”