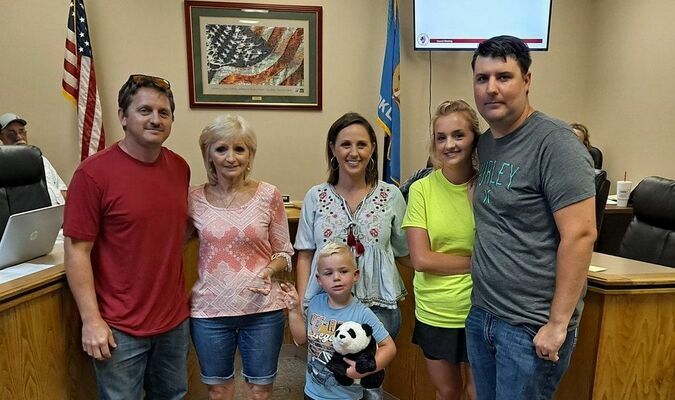 The Comanche City Council bid farewell to one of its longest-serving members as Cne’ Geraghty resigned from her position on the board at the June meeting held last Tuesday.

Geraghty had served 11 years, but has moved out of Ward 4, where she served, and had to step down.

Geraghty came on board in October 2008 and saw many changes during that time.

Also, the council authorized the city manager to spend up to $37,500 to build the new bathrooms for the rodeo grounds and Comanche Lake. The buildings will be paid for with a $28,300 grant from the USDA and a $9,500 match from the city.

In news of another grant, city council members authorized the fire chief to apply for a community fire assistance 80/20 reimbursement grant for bunker gear. The cost would be $25,000 total with $20,000 coming from the grant with a $5,000 match that would be paid from the rural fire department fund.

Fire chief Scooter Bivins said that 17 sets of structure gear the department has are at least 13 years old. The grant would pay for three-quarters to be replaced with the others being replaced a little at a time.

During the city manager’s report, Ralls reported that the rumors that Comanche was losing its ambulance service were not true. He said AMR was ceasing operations in the area, but another company, Survival Flight, was taking over and it would be a seamless transition with no pause in services.

During the Public Works Authority portion of the meeting, Ralls reported that the city did not make its anticipated income on power and water as uses for both were down over the past fiscal year. He said the income was 87 percent of what was budgeted and that the city had to make some cuts in some areas in order to stay within the budget.

The result of that is there may be a price increase coming for the next fiscal year.

Another reason is the spike in the consumer price index (CPI) this year. The city will see an increase of more than six percent in the upcoming fiscal year. In the past few years, the CPI increase has been 1.5 percent or less so city officials did not raise rates on customers at that time.

The good news was the city was able to finish in the black on both the city and power authority sides of the budgets.

In other business, members authorized the repair of the S. 2nd Street lift station generator after it was disabled after being struck by lightning. They also agreed to purchase lightning arrestors for all five lift station units at a total cost of $2,000 in hopes of preventing another lightning strike directly to the generators.