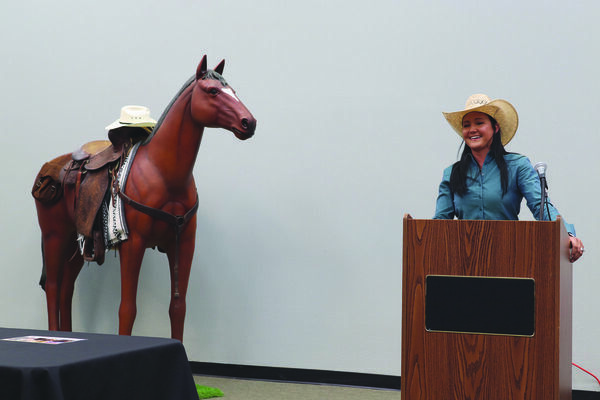 In her public speaking debut after being crowned the winner of the “Ultimate Cowboy Showdown,” reality TV show series in April, Katey Jo Gordon spoke of her experiences on the show.

Gordon was the guest speaker at the “Lunch and Learn” event at Chisholm Trail Heritage Center last Thursday. Gordon talked about her background about growing up on ranches in New Mexico and Oklahoma, which helped lead her to be considered for the INSP network show.

She spoke of the interview process that led to her being selected and by the time everything was finalized she was one of 14 contestants selected out of more than 1,400 applicants.

Gordon took several questions from the audience, who had come to hear her speak.

She was asked about the set-up and the verbal clashes between the contestants, which occasionally became heated.

“It was unscripted, the emotion was real,” Gordon said. “When Lonnie walked his horse in front of Jackson (an unwritten cowboy code violation), and all that was said after that was real.”

Gordon said she intentionally stayed out of the arguments.

“Whenever something would come up I would just walk away,” Gordon said. “I couldn’t believe some of the ways they were talking to each other. When you work a ranch, you have to learn to work together. You would never get away with that working with the guys I work with.”

Gordon will be back at the CTHC this Saturday at the National Day of the Cowboy celebration. She will be signing autographs from 10 a.m. to noon.