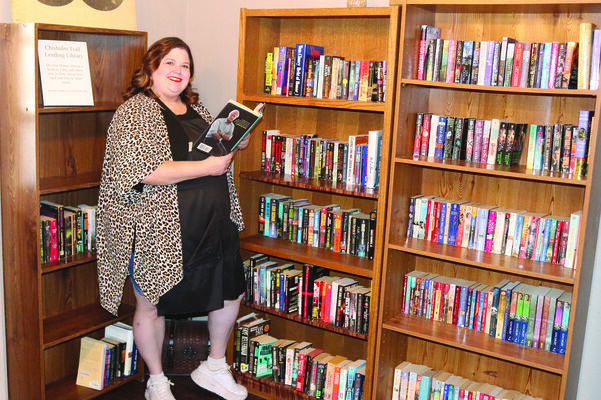 Brenda Lingelbach had no plans to start a library, it just kind of happened.

As the owner of Chisholm Trail Family Haircare, she wanted to give her customers waiting for a haircut another option other than watching television or looking at their phones.

Lingelbach had thought about having books so customers could take them home and then bring them back when she first opened the shop a couple of years ago. It never happened until about six or seven months ago when a customer asked her if she was still looking for books.

“I said sure,” Lingelbach said. “I’d like to have a few books set out for customers who have to wait a little while. They don’t have to watch TV, they can pick up a book and read it. If they like it they can take it home, read it and bring it back the next time.”

Events took off quickly from there. Suddenly, it was not for the regular customer anymore. She started amassing donated books while scouring social media and yard sales for used bookshelves to put them on.

Now, she has an unofficial public library called Chisholm Trail Lending Library with approximately 350 titles in several different genres. There are mysteries, horror, romance, westerns, children’s books and others.

The lending library is based on the honor system. People do not have to check out books or sign anything. It is asked they bring them back for someone else to enjoy when they are finished.

“You don’t have to be a customer (of the shop) to use it,” Lingelbach said.

She already has people visiting regularly. One retiree walks to her shop every week to get new books. Another older woman comes to the lending library because her husband doesn’t feel comfortable with her driving to Duncan by herself. There is a gentleman that comes in weekly to peruse the books that once gave her $5 to help purchase bookshelves.

“He said, ‘I know you aren’t making any money off of this, so I wanted to help,’” Lingelbach said. “I thought that was so sweet of him.”

She didn’t even have to purchase the last bookshelf. She had found one in Lawton on an online marketplace and when she went to pay for it at the pickup spot, the seller told her not to worry about it and gave it to her for free.

“He had heard what I was doing and wanted to just give it to me,” Lingelbach said.

Her aunt, who owns a used bookstore in Marlow, came to help her sort the books.

“I’m not a librarian, so everything was just up there together,” Lingelbach said. “She helped me sort things by genre and taught me how to do it.”

She is looking for a way to get labels on the bookshelves so people can come in and see what genre is where so she doesn’t have to leave a customer in a barber chair to go tell a visitor where everything is.

Even though it was not her intent at the start, she feels like it is filling a need in the community.

“I really do because I never really noticed that there wasn’t a library in town when we moved to Comanche three years ago,” Lingelbach said. “But, when I put that first bookshelf up with those books, people just went crazy. They were so excited because Comanche doesn’t have a public library of its own.”

She went on to say that it benefits those who are not able to travel and helps those who can’t afford to purchase books.

“Especially if you like to read a lot,” Lingelbach said. “It’s not huge, but it’s something. It definitely does fill that need, I believe.”

She said she has had people offer to buy books, but she wants to keep it as a library so that as many people as possible can enjoy them.

Lingelbach is continuing to take donations of books and bookshelves.

“I’ll keep taking them until I run out of space,” she said.

The library is open the same hours as her business at 402 Rodeo Drive. The hours are 9 a.m. to 5 p.m., Tuesday through Friday and 9 a.m. to noon, Saturday.